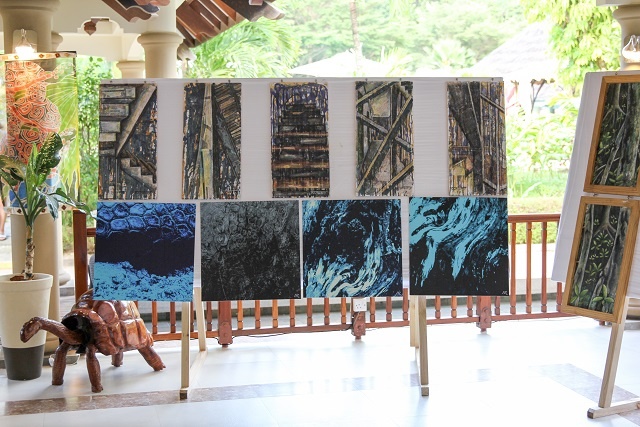 (Seychelles News Agency) - A group of artists has joined national efforts to promote conservation and protection of the Curieuse Island's biodiversity through their paintings. The artworks are by PROART, Seychellois artists specialising in visual arts.

This is the first time that paintings and drawings promoting conservation and environmental protection have been exhibited on Praslin - the second-most populated island of Seychelles.

Charles Dodo, chair of the group, said that the weeklong exhibition - which opened on Friday at La Reserve Hotel - is themed Curieuse through the eyes of artists.

“We wanted to raise awareness on the island itself. Its beauty and unique environment. Yes, we wanted to capture the landscape, plants, and animals as well as its magnificent boulders. But at the same time we wanted to show that through paintings and drawings we can help with national conservation efforts," said Dodo.

The chair of the group said that they also wanted to show some threats that the island – a national park – is facing amid conservation work.

“Curieuse has some bare mountainous areas due to serious erosion. We wanted to portrait this as well.  And send a clear message that we artists can also do our part to raise awareness of such threats and challenges.”

PROART wants to get the general public to also appreciate the island better instead of just using its beaches for leisure activities.

Curieuse – a national and marine park managed by the Seychelles National Parks Authority – is located off the north coast of Praslin. It is notable for its bare red earth mountains. It is the only other island in the Seychelles – a group of 115 islands in the western Indian Ocean- apart from Praslin, where the unique coco de mer palms grow naturally.

Dodo said that the works to raise awareness on the need for protection and conservation of the environment were conceived through a weekend camp on the island.

“I was on the island along with two other artists to do some restoration on the doctor’s house – a national monument - and I got inspired by its landscape,” said Dodo.

The artist then approached the Seychelles National Parks Authority with the idea to camp and do live paintings and received their full support.

Frances Chang Him was among the group who went to Curieuse. Chang Him said the group had a common goal to do something which they loved, that is painting and to do their bit for the environment.

“As we did not have a lot of time we decided on what was best to be captured. When that was decided, we started our work. We started to paint on site but with the time constraint we also did sketches and took photos.”

Chang Him who last year took part in the Seychelles biennale of art said her first time on the island was enriching.

“Being on the island gave me the chance to appreciate its natural beauty and all the effort that goes into protecting Curieuse as a protected area, as well as its rich history. The ruins of the leprosy colony were fascinating.”

In 1829, Curieuse was first used as a leper colony, and it functioned in this capacity until 1965. The ruins of the leprosarium remain, as well as the former physician's residence at Anse St. Joseph. The doctor’s house is now an educational center and museum.

The chief executive of the authority, Flavien Joubert, said that in future these artists will have a place on the island to display their work.

“We have plans to build a reception on the island which will have an area for exhibits and a shop. We will also sell other artifacts. But mostly we will sell souvenirs of Curieuse.”

Joubert said “paintings in the exhibition can be reproduced and for example put on t-shirts and sold. This will be a promotion for them and for us as well.”