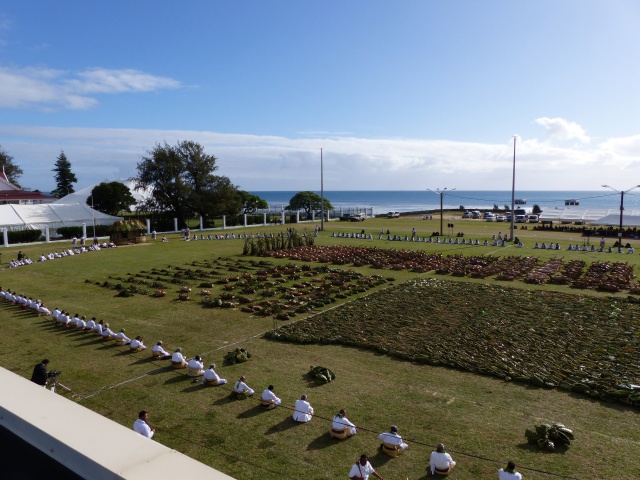 Guests prepare for the start of the Coronation Taumafa Kava ceremony for King Tupou VI of Tonga in Nuku'alofa on June 27, 2015.  Tonga declared a state of emergency Monday and imposed a curfew in the capital Nuku'alofa as the Pacific island kingdom braced for a direct hit from Severe Tropical Cyclone Gita. (AFP PHOTO / PETER POULSEN / MATANGI TONGA)

(AFP) - Tonga declared a state of emergency Monday and imposed a curfew in the capital Nuku'alofa as the Pacific island kingdom braced for a direct hit from Severe Tropical Cyclone Gita.

The cyclone has already created havoc in neighbouring Samoa and is threatening to become a Category Five superstorm as it approaches Tonga.

Acting Prime Minister Semisi Sika issued a nationwide alert, saying he was "satisfied that an emergency is happening or is about to happen".

The Fiji Meteorological Service predicts Gita will become a Category Five storm -- the top of the scale -- before reaching Tonga Monday night.

It is already packing gusts of 275 kmh (170 mph) as it sits off the east coast of the country's most populous island Tongatapu.

Truckloads of troops were helping people batten down as the capital prepared for the cyclone and evacuation centres were opened across the kingdom.

"We are urging people to seek refuge from this severe cyclone that could be the most powerful in the country’s history," said police commissioner Stephen Caldwell.

Gita slammed into Samoa overnight Friday, forcing the evacuation of some 200 people and causing widespread flooding, leaving many without power.

"It's pretty rare to see the perfect circle, the centre of that storm, going right over the top of such a small island."

Duncan said the cyclone could cause major damage even if it remained offshore.

"If it moves just a little bit north or south it may not make technical landfall but it's severe weather, winds up to 230 kmh, waves over 10 metres at sea and a storm surge over a metre on top of that," he said.

The information ministry advised anyone considering moving to the shelters to leave early, saying travel would not be possible when the eye of the storm passes over.

Otherwise people should stay at home and ride out the wild weather, it said.

"Every family should have an emergency kit packed in their homes," it warned.

"Everyone should be mindful of what might cause damage within their homes such as large trees that can potentially damage a house."

"We are looking at major structural damage," he warned.

Cyclones are common in the Pacific at this time of year, with Category Five systems proving highly destructive when they make landfall.