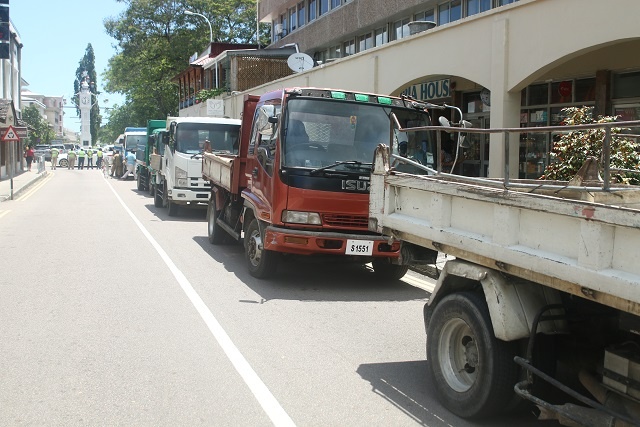 The protest started on Monday with a number of pickup trucks lined up in front of the gate leading to the State House. (Joe Laurence, Seychelles News Agency)

The drivers of trucks for hire are asking the authorities to design a national tariff. They are also demanding that they are contracted to participate in big national projects. They cited as an example the work for raising the main water reservoir at La Gogue in the north of the main island Mahe.

The protest started on Monday with a number of pickup trucks lined up in front of the gate leading to the State House and continued on Tuesday with drivers gathering on the Independence Avenue close to the clock tower. The Truck drivers are claiming that the Sinohydro Corporation, a Chinese company based in Mauritius, is importing their own vehicles for the work on the dam.

Speaking to SNA, Neil Amelie, a 24-year-old truck driver, said he is protesting in solidarity to other drivers who are not getting any contracts and are struggling to make ends meet.

“We are demanding for a national cost per tonne because it is not regulated. We are forced sometimes to bring our rate down to 25 rupees ($2) a tonne. This rate barely meets our operational cost,” said Amelie.

Another driver, Tony Bastienne, 46, said that the authorities need to rethink on how the wealth of the country is distributed as most of the work is awarded to bigger companies.

Bastienne added that if there is no solution, they will reinforce the number of protestors and block the street.

The protest also led to the authorities calling for a special meeting to discuss the matter with all the parties involved.

After meeting with the representatives of the pickup truck drivers, the Minister for habitat, infrastructure and land transport, Charles Bastienne, told journalists that they have discussed with the Chinese company which said they have not refused local workers.

The minister said, “It is important that we outsource for businesses with the expertise, but it is of paramount importance that we incorporate Seychellois workers in the process.”

Bastienne added that provision has already been made to remove the trucks imported by the Chinese companies on the site.

With regards to setting up a national tariff, the minister said that the authorities will immediately work on one that will provide regulations for the business.

The acting chairperson of the Association for pickup and equipment for hire, Jeffery Delorie, said that they will not remove their trucks until they are given something in writing.

A consultant working for the association, Jovana Neves, said that the government has been presented with the idea for a national tariff for over 10 years now and nothing has been done.

“For the time being, along with the association of pickup and plant, we are going to discuss with the Chinese company on a tariff that will suit the drivers that will take in the project raising the La Gogue dam and the company,” added Neves.

Construction work to raise Seychelles' main reservoir -- La Gogue Dam -- to increase its water storage capacity started last year in November. The level of the reservoir, built in 1969 in the northern Mahe district of Anse Etoile, will be raised by six metres to increase its storage capacity by 60 percent. The project is being undertaken by the Sinohydro Corporation and is expected to be completed by 2019.