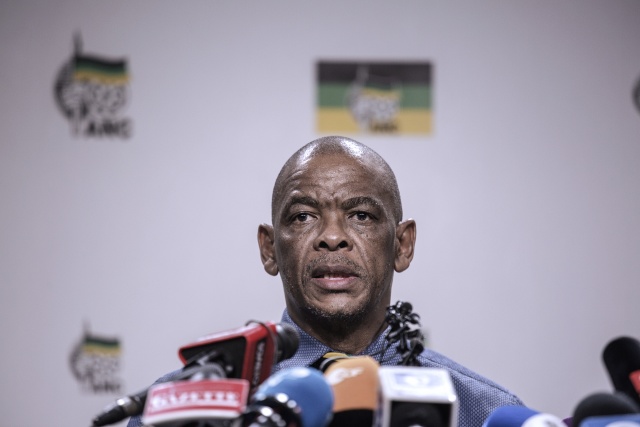 South African ruling Party African National Congress Secretary General Ace Magashule gives a press briefing on February 13, 2018 on the outcome of the ANC National Executive Committee, in Johannesburg at the African National Congress Headquarters. South Africa's ruling ANC party confirmed today that it had decided to "recall" scandal-tainted President Jacob Zuma from office, but said no deadline had been set for him to resign. (GIANLUIGI GUERCIA / AFP)

(AFP) - South African police Wednesday raided the Johannesburg home of the business family accused of overseeing government corruption under President Jacob Zuma, who has been ordered to resign by his party.

Zuma is expected to respond to the ANC party's order later Wednesday, hours after police arrived at the Gupta family's heavily protected house in the upmarket suburb of Saxonwold in the early morning.

"We have now left the compound. It is an operation that is ongoing related to issues of 'state capture'," police spokesman Hangwani Mulaudzi told AFP referring to the alleged corruption of state institutions under Zuma's reign.

The president, who could be ousted in a parliamentary vote of no confidence if he clings to office, has "agreed in principle to resign", secretary-general of the African National Congress (ANC) Ace Magashule said Tuesday.

The power struggle over Zuma's departure has put him at loggerheads with deputy president Cyril Ramaphosa, his expected successor, who is the new head of the party.

"Recalling" the head of state is a party-level instruction that the 75-year-old Zuma is under no constitutional obligation to obey.

The ANC's national executive committee reached the decision in the early hours of Tuesday after meeting for 13 hours at a hotel outside Pretoria.

A committee member confirmed to AFP that the president had asked for three more months in office, describing the request as "hogwash".

One case relates to 783 payments he allegedly received linked to an arms deal before he came to power.

Many graft allegations against him have centred on the wealthy Gupta family, who are accused of unfairly obtaining lucrative government contracts and even being able to choose ministerial appointments.

Susan Booysen, a politics professor at Stellenbosch University, said she expected that Zuma would resign -- albeit grudgingly.

"I think that he is an angry person... and he is very reluctant to go. His power could still hover in the background," Booysen told AFP.

The political wrangle has plunged South Africa -- the continent's most developed economy -- into confusion over who is running the country, with last week's annual State of the Nation address cancelled.

South African opposition parties have called for early elections as the ANC's turbulent transfer of power to Ramaphosa grinds on.

Zuma's presidency has been marred by corruption scandals, slow economic growth and record unemployment that have fuelled public frustration.

He was scheduled to stand down next year after serving the maximum two terms since coming to power in 2009.

In 2008, Zuma's supporters pushed out then-president Thabo Mbeki via a similar "recall" manoeuvre over allegations of abuse of power.

In local polls in 2016, the ANC recorded its worst electoral result since coming to power in 1994 with Nelson Mandela at the helm as white-minority rule fell.

Ramaphosa, 65, the deputy president, must revive the economy and crack down on what he has admitted is rampant government corruption if he is to boost the party's tarnished reputation before a tricky election next year.

He is a former trade unionist and Mandela ally who led talks to end apartheid in the early 1990s and then became a multi-millionaire businessman before returning to politics.

An opposition request for a no-confidence vote against Zuma this week was still being considered by the parliament speaker.