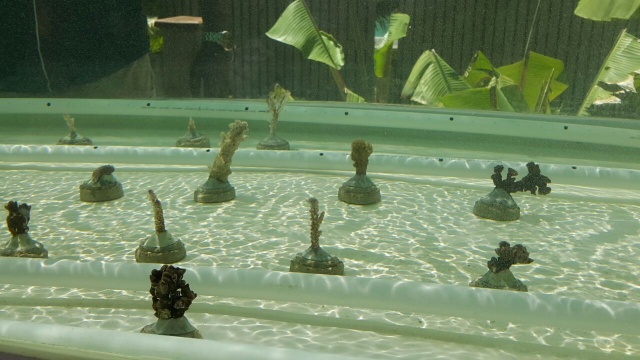 In the on-land nursery, corals will be grown in tanks as a backup stock for the sea nursery. (Lisa Booyse, Anse Forbans Community Conservation Programme)

(Seychelles News Agency) - A conservation group from Anse Forbans has launched the first on-land coral nursery project to educate the community and act as a backup plan in case of a major seawater warming effect in Seychelles.

The chairperson of the Anse Forbans Community Conservation Programme, Lisa Booyse, said that Seychelles needs to be prepared as it is fast losing its corals to coral bleaching events and other issues such as human destruction, anchorage and marine pollution.

“It is essential that we maintain our corals for our livelihoods, fish stock and to protect our beaches from erosion and flooding. As a community, we all need to start to realise the situation,” said Booyse.

The project launched last week is an initiative of the Anse Forbans not-for-profit group from the southern Mahe district of Takamaka, in partnership with the Marine Conservation Society Seychelles, DoubleTree Resort and Spa, and the Mauritius Commercial Bank.

The project has two sections: a sea nursery which includes planting of coral in the sea and will start soon, and a coral on-land nursery. In the on-land nursery, corals will be grown in tanks as a backup stock for the sea nursery in case Seychelles experiences another sea water warming effect like the ones which previously destroyed other sea nurseries.

The general manager of DoubleTree, Doreen D' Souza, said that as the project is based on the hotel premises, it is open for our guests or other guests to visit the project.

“Also, every Tuesday, we will organise a short talk with guests by one of the volunteers. During our management cocktail every Wednesday, the guests will have another chance to catch up with the project update as another volunteer will be present to give the update,” said D' Souza

The first bleaching catastrophe in Seychelles happened in 1998 when up to 97 percent of corals in some areas bleached and caused many reefs around the islands to collapse into rubble.

The chairperson of the Marine Conservation Society Seychelles, David Rowat, said that there is no coral bleaching around Seychelles as the sea temperatures are within normal range.

The coral reef report of the western Indian Ocean for 2017 said although Seychelles and Kenya suffered the greatest mortality of corals in 1998, since then they have shown good recovery of corals.

Seychelles, an archipelago in the western Indian Ocean, is more vulnerable to climate change as it is closer to the equator, making the water warmer than neighbouring islands Mauritius and Reunion, an overseas French department.

The chairperson of the Anse Forbans conservation group said the nursery will be used to educate the community on the importance of corals.

“I am hoping in the form of awareness and education for a quicker result. The corals will take 9 months before we can transplant them back into the ocean. But in the meantime, we need to spread the awareness of our actions and the impact it makes on corals,” said Booyse.

The project has been funded by Mauritius Commercial Bank at a cost of $14,467 (SCR 200,000) to help in protecting the reef area for generations to enjoy.

Seychellois look to the sea for sustenance with an Exclusive Economic Zone of 1.37 million square kilometres and fishing is the second top contributor to the island nation’s economy.

“Submerged”: A photo exhibition links the North Pole and Antarctica to Seychelles