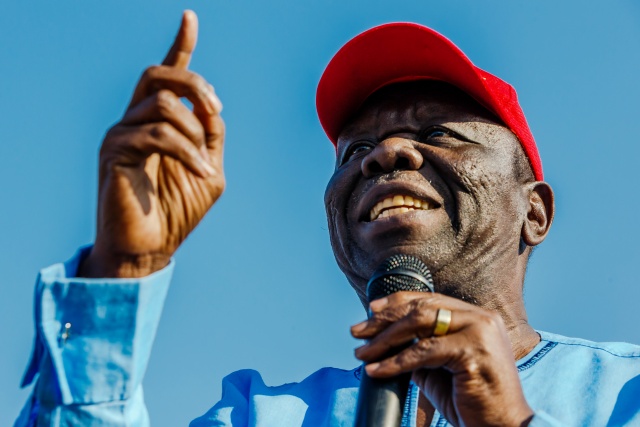 (AFP) - Morgan Tsvangirai, the veteran Zimbabwean opposition leader who confronted Robert Mugabe's regime for many years, died on Wednesday after a battle with cancer, a party official said. He was 65.

Tsvangirai, who founded the Movement for Democratic Change (MDC) party in 1999, was among the most prominent critics of Mugabe, the long-time authoritarian leader who was ousted from power in November.

"It is sad for me to announce that we have lost our icon and fighter for democracy," Elias Mudzuri, one of the vice-presidents of the MDC, said on Twitter.

Tsvangirai's death in a South African hospital, where he was receiving treatment, was confirmed to AFP by two other senior party members.

Mugabe's ZANU-PF government detained him on numerous occasions due to his vocal criticism of the regime.

Security forces first swooped on Tsvangirai, then a feisty trade union leader, in 1989 after he bluntly warned about the rising tide of political repression in the country.

Ten years later he set up the MDC, which rose to pose the greatest challenge to Mugabe's all-powerful government.

In March 2007, police badly beat up Tsvangirai and dozens of opposition activists when they attempted to stage an anti-government rally in a township in Harare.

In the election the following year he beat Mugabe in the first round of the vote -- but after violence against Tsvangirai's supporters, which he claims cost 200 lives, he was forced to pull out of the run-off.

He went on to form a unity government with the ruling ZANU-PF after disputed elections, but was widely seen as being outmanoeuvred as he served as prime minister under Mugabe.

Tsvangirai claimed to have been the target of four assassination attempts -- including one in 1997 in which he said attackers tried to throw him out of his office window.

Last week senior members of his party clashed in public in a power struggle between Mudzuri and another of his deputies Nelson Chamisa, 40, over who was in charge of the party -- months before key elections. Analysts warn that the party is likely to face a major split following his death.

Tsvangirai's death firmly places President Emmerson Mnangagwa, the ZANU-PF veteran who took over after Mugabe's ousting, on the path to victory in elections that are to be held before July.

"Very sad indeed -- as you know the president (Mnangagwa) visited him at home to wish him well -- but God gives and God has taken," ZANU-PF spokesman Simon Khaya Moyo told AFP.

"The fact that the President visited him shows what type of person he was," said Moyo.

Tsvangirai who announced two years ago that he had been diagnosed with colon cancer, was the face of bravery in Zimbabwe opposition politics.

"Morgan Tsvangirai represented courage and determination in the face of oppression, and gave ordinary Zimbabweans faith to believe in the future, " tweeted British foreign minister Boris Johnson. "He was one of the bravest political leaders of his time and will be sadly missed".

David Coltart, a fellow opposition leader who was one of the founding members of the MDC but later joined a splinter group, wrote on twitter that Tsvangirai will be remembered as one of Zimbabwe's "greatest patriots" and that he deserves to be called a "hero".

"Although like all of us he made mistakes, none of us ever doubted his commitment to transform Zimbabwe into a modern, democratic, tolerant state," Coltart said.

The young opposition politician Fadzai Mahere said in a tweet "Rest in power" Tsvangirai. "Thank you for forging the path and blazing the trail in the struggle for democracy."

"ZANU-PF has not won recent elections, it has rigged them," Tsvangirai told AFP last year.

"Anyone who is interested in ending ZANU-PF should unite, in spite of ideological differences."

"Tsvangirai will be remembered as the brave man who demystified dictatorship in Zimbabwe. He was the godfather of genuine opposition politics who formed a formidable opposition to Mugabe's dictatorship," Rusero told AFP.

South Africa's ruling ANC party, Kenyan leader Uhuru Kenyatta and the government of Botswana expressed their condolences over the passing of Tsvangirai.