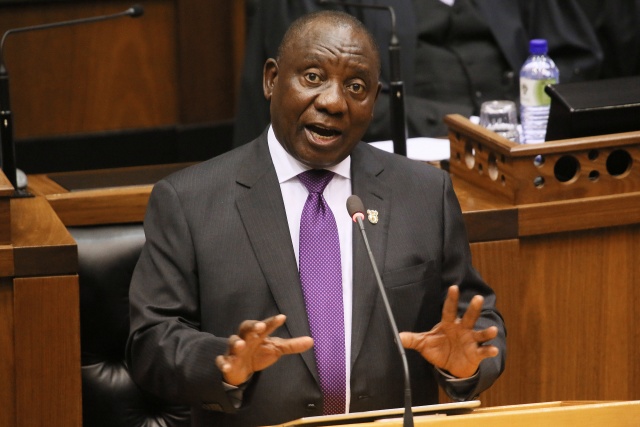 South Africa's newly-minted president Cyril Ramaphosa delivers his State of the National address at the Parliament in Cape Town, on February 16, 2018. The State of the Nation address is an annual mix of political pageantry and policy announcements, but the flagship event was postponed last week as Zuma battled to stay in office.
(MIKE HUTCHINGS / POOL / AFP)

(AFP) - South Africa's freshly-appointed president, Cyril Ramaphosa on Friday hailed "a new dawn" as he pledged to tackle the corruption that his predecessor Jacob Zuma is accused of fostering.

"We should put all the negativity that has dogged our country behind us because a new dawn is upon us and a wonderful dawn has arrived," Ramaphosa told parliament in the annual State of the Nation address.

"Tough decisions have to be made to close our fiscal gap, stabilise our debt and restore our state-owned enterprises to health," he said, adding "our most grave and most pressing challenge is youth unemployment."

In his first full day in office, Ramaphosa won loud applause and cheers from many ANC lawmakers who were fiercely loyal to Zuma throughout his turbulent and often divisive presidency.

Zuma was forced to resign on Wednesday after the ruling African National Congress finally turned against him, with pro-business reformist Ramaphosa sworn in as president on Thursday.

After multiple corruption scandals, economic slowdown and falling popularity with voters, the ANC had threatened to oust Zuma via a no-confidence vote in parliament.

Zuma resigned reluctantly, complaining he had received "very unfair" treatment from the party.

"The last positive speech of this sort that I heard was in 1994 when Madiba spoke," said Narend Singh, chief whip of the Inkatha Freedom Party, referring to Nelson Mandela.

"He's returned faith in members of parliament -- and in South Africans."

Ramaphosa, 65, is a former trade unionist who led talks to end apartheid in the early 1990s and then became a multi-millionaire businessman before returning to politics.

Ahead of the speech, he told journalists he was "a little bit excited, expectant, a little apprehensive".

Among the immediate challenges he faces are a gaping 50-billion-rand ($4.3-billion/3.44-billion-euro) deficit, the threat of further credit rating downgrades, and 26.7-percent unemployment.

"We will be initiating measures to set the country on a new path of growth, employment and transformation," he said, giving few policy details.

"We have to build further on the collaboration with business and labour to restore confidence and prevent an investment downgrade."

Eurasia Group analyst Darias Jonker predicted that Ramaphosa would remove many Zuma loyalists from the cabinet, but only after the budget speech on 21 February.

"(He) will also go after high-level corruption, particularly the Gupta family and their associates, which include members of the Zuma family. This campaign will greatly contribute towards restoring investor confidence," Jonker said.

The Guptas are a business family from India who formed allegedly improper ties to Zuma. They are accused of receiving hugely favourable government deals and even influencing cabinet appointments.

Police on Thursday said an arrest warrant had been issued for one of the brothers, Ajay Gupta.

The COSATU trade union federation, an ANC ally, called on Ramaphosa to cut back the executive and crack down on government excess.

"Bling lifestyles of the political elite at the expense of the taxpayer must be stopped," it said.

The South African Communist Party (SACP), another ANC partner, said Ramaphosa must prioritise the "dismantling of parasitic networks surrounding our state and decisively bringing an end to corporate capture of the state."

Ramaphosa's appointment saw benchmark South African stocks score their biggest gains since June 2016 while the local rand currency reached its strongest level against the US dollar in three years.

In previous years, the EFF party had disrupted Zuma's State of the Nation speech with its lawmakers walking out -- or protesting and then being physically ejected from the chamber.

On Friday, though, the EFF remained in their seats to listen to Ramaphosa's speech.

Zuma appointed him deputy president in 2014.