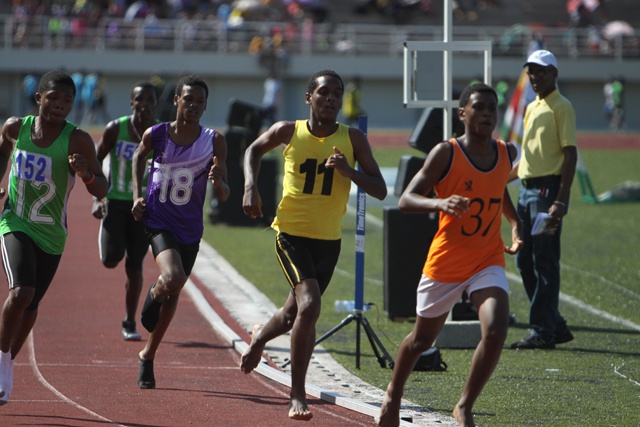 (Seychelles News Agency) - The best of Seychelles younger athletes showcased their talents today in the National Schools Athletics Championship on the main island of Mahe.

The 2014 National Athletics Championship has seen some 1100 athletes compete in 66 track and 30 field events from schools across Seychelles main populated island of Mahé as well as the second and third most populated islands of Praslin and La Digue.

Spectators including parents, family members and athletics fans made their way to Stad Linite as the event unfolded on this hot and sunny Sunday to cheer the young athletes as the sprinted to the finish line or try to jump furthest or highest to claim the gold, silver and bronze medals in each event.

As of next year the biggest sports manifestation for Seychellois students which has been the main event on the calendar of Seychelles Independence Day activities on 29th June for the last 38 years will take place on 18th June.

This was announced this morning by the Seychelles Minister for Education, Macsuzy Mondon as she gave the ‘coup d’envoie’ of this year’s National Schools Athletics Championship at Stad Linite, the main stadium on the island.

The only year the championship failed to take place was in 1993 when Seychelles was organizing the Indian Ocean island games.

The Schools Athletics Championship is an opportunity for Seychellois students from primary, secondary up to post-secondary level to showcase their talent in track and field events from 60 metre race for the youngsters to 1500 metres race for the older ones, relay, high jump, long jump, shot put.

“In last year’s championships a total of 15 records were improved.  Since then a number of these young athletes has continued to excel in their respective sport discipline. We look forward to this year’s championships providing the platform, for even better results and challenging competitions,” said Mondon at Stad Linite this morning.

The full day event which started at 10.00am local time culminated with the Prize presentation ceremony which includes trophies to the best performing schools based on the number of points accumulated as well as fair play which is presented to the school whose athletes display a good level of respect and fair play towards fellow competitors and officials.

Seychelles President James Michel presented the winners of the Fair Play Cup with their trophies.

For the first time this year schools that have better prepared their athletes for this championship were also rewarded through ‘The Young Athletes Health Promotion Award’.

This is an initiative of the Seychelles Ministry of Health as part of its ‘My Health, My responsibility’ campaign launched earlier this year.

A committee comprising of representatives of the Ministries of Health and Education, in collaboration with the National Sports Council and the Red Cross Society of Seychelles have assessed the different schools on how they prepared their athletes before and during the championship.

The 2014 National Athletics Championship came to an end at around 5.15pm local time.

The exact number of national record set this year has not been confirmed.