Efforts being made to counter invasive ants on island in Seychelles 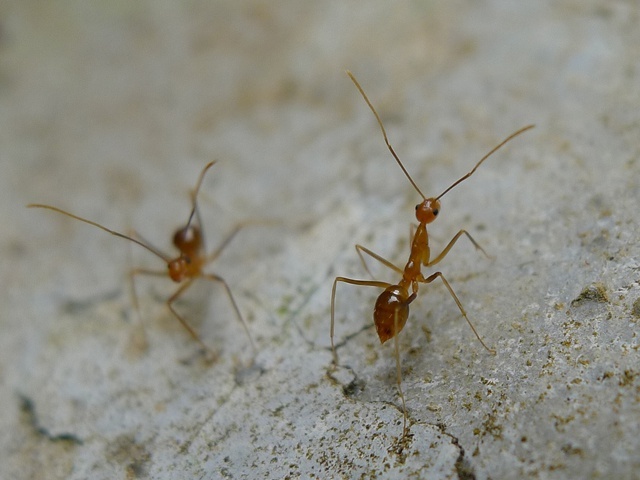 (Seychelles News Agency) - A Seychelles’ UNESCO World Heritage site is introducing for the first time trial methods to fight against invasive ants that pose a threat to native species in the area, a Vallee de Mai official said.

Officials working in Vallee de Mai on Praslin, the second-most populated island, have recorded an increase in the number of yellow Anoplolepis gracilipes - commonly known as yellow crazy ants – over the past year. Their distribution over Vallee de Mai -- a protected reserve and home to the endemic coco de mer -- has increased from 74 percent in 2016 to 92 percent in 2017.

Yellow crazy ants -- so called because of their colour and frenetic movements -- have been observed attacking or killing native species such as black parrot chicks, caecilians, amphibians and black scorpions.

One method to be tried to control them is tree wrapping. Selected trees will be wrapped in cling wrap sprayed with furniture polish or cloth soaked in eucalyptus oil.

“These methods are not toxic and aim to act as deterrents to the ants. This approach will prevent the ants from accessing the canopy and therefore black parrot nests,” said Vicky Stravens, the Vallee de Mai science coordinator.

Currently, this is being done on trees that have an active trail of ants. These are being checked frequently in order to monitor for impacts on any other species.

A second trial using a specially designed ant bait dispenser is also to be trialed later in the year. The ant bait stations are also expected to have minimal non-target impacts.

Designed specifically for ants, other species such as geckos or skinks can’t access the bait. Stravens said that “yellow crazy ants are so numerous that they will monopolise the bait, preventing other insect species getting to it.”

Every year, a survey is carried out to monitor ant distribution over time, and to determine whether they are spreading to new areas or increasing in number.

The Vallee de Mai science coordinator told SNA that “monitoring invasive species is a key first step towards understanding their impact on the ecosystem and in designing control or eradication methodologies.”

The survey carried out last year showed that the crazy yellow ant population has spread out all over Vallee de Mai, except for a narrow strip in the southern part of the forest. Out of 50 core points included in the survey, yellow crazy ants were present in 46 randomly selected sites.

Yellow crazy ants -- a species of tramp ant -- can create ‘supercolonies’ of many millions of ants spread over a vast area.