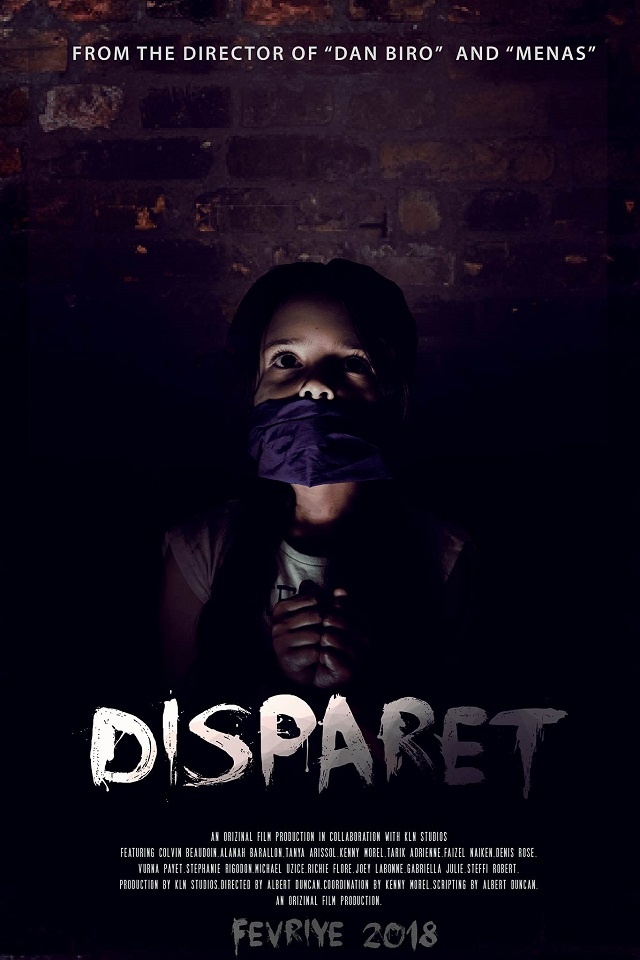 Dubbed “Disparet” (Creole for disappear), the series is the brainchild of Albert Duncan, the scriptwriter, and founder of production house, Orizinal Film. (Kit li Orizinal/Facebook)

(Seychelles News Agency) - A group of local film producers wants to create awareness of how precious children are and the importance of caring for them through the production of their latest short-series which will premiere on February 24.

Dubbed “Disparet” (Creole for disappear), the series is the brainchild of Albert Duncan, the scriptwriter, and founder at Orizinal Film, a production house in Seychelles, a 115-island archipelago in the western Indian Ocean.

The series 'Disparet' will be premiered this Saturday at the Irish Rogan's Bar at the Docklands building at 9 p.m.

Talking to SNA about the eight-episode-long series, Duncan said that he wanted “to write a story that people will be able to relate to and 'Disparet' has something for everyone in the society.”

“After watching ‘Disparet’ we want the viewers to realise how much danger surrounds children and to keep a closer watch on them,” said Duncan.

Not wanting to reveal too much about the series, the creative director of ‘Orizinal Film’, Kenny Morel, said that other than the story revolving around disappearance “it is about the struggle of a guy to balance responsibility and selfishness.”

Talking about the title choice of the series, Duncan said that contrary to what people might think, the title has nothing to do with past events that have happened in the country.

Morel added that title choices for all their series are “a bit ambiguous.”

“When you hear the title, it could mean anything but there is a very strong link with the story being told within the series. We want to capture the attention of people with these choices,” said Morel.

‘Disparet’ is one of the series on which Orizinal Kreol is working in collaboration with Kit Li Normal (KLN).

Apart from the good existing relationship between the two production houses, Duncan explained that working with KLN on this project allow crews of Orizinal Kreol to focus on their individual tasks.

“At times when you are concentrating on the story, filming and editing yourself, your focus is all over the place. The collaboration with KLN, allows us to concentrate more on the cast and the story itself,” he said.

Old and new faces form the cast of ‘Disparet’, with known local actors including Vurna Mondon, Colvin Beaudouin and Richie Flore. Casting was done through a Facebook audition and the crew saw a good turnout. Each potential actor was asked to choose the character they wanted to represent, given part of the script and acted out how they interpreted the scene.

Though they are not getting paid for the production of their series, Duncan says that they are “developing the film industry in Seychelles.”

“Cinema captures the social environment, attitudes, and perception of people of a country at the time they were filmed, so we are also trying to preserve the Creole culture. Seychellois living in 2090 will want to know the time we are living today,” he said.

Duncan is asking viewers to watch ‘Disparet’ with an open mind as some of the language used in some scenes can be considered as explicit. He explained that “it should be kept in mind that that is the way we talk.

“This does not mean that we are promoting the use of bad language or vulgarity - we produce what we see,” he added.

Another benefit of filming to him is the satisfaction the team receives when they hear locals talking about their production, especially as they are 100 percent made by Seychellois.

Though ‘Disparet’ is still being filmed, the Orizinal Kreol crew already has a lineup of projects that they plan on bringing to life. Filming of a series takes some time to be completed as the cast and crew get to work together only on Saturdays – the only day when everyone is free.