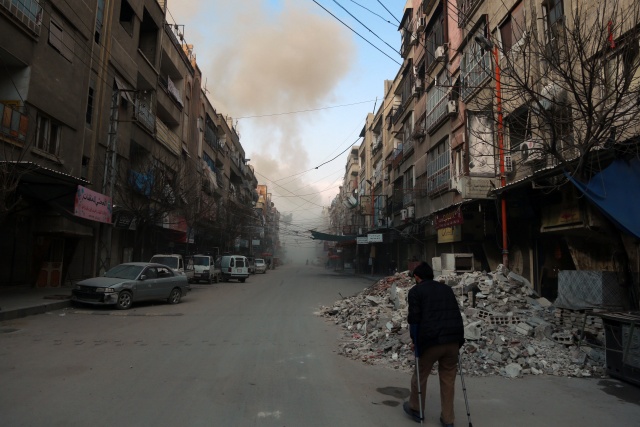 A Syrian man on crutches walks down a street as smoke billows in the rebel-held town of Douma, in the besieged Eastern Ghouta region on the outskirts of the capital Damascus, following air strikes by regime forces on the area on February 23, 2018. (HAMZA AL-AJWEH / AFP)

More than 460 civilians, including over 100 children, have been killed in nearly a week of bombardment that has been one of the seven-year conflict's bloodiest episodes.

Diplomatic haggling delayed a vote at the United Nations Security Council on a 30-day truce, with Kuwait's Ambassador Mansour al-Otaibi, who holds the council presidency, saying "we are very close" to agreement with Russia, Syria's ally.

The Security Council is scheduled to meet at noon (1700 GMT) Saturday to vote on a draft resolution demanding a 30-day ceasefire, but it remained unclear whether Russia will veto the proposed measure.

Amid the wrangling, US President Donald Trump slammed the actions of the Syrian government and its Russian and Iranian supporters as a "humanitarian disgrace."

Few of Eastern Ghouta's nearly 400,000 residents -- mostly living in a scattering of towns across the semi-rural area east of the capital -- ventured out on Friday.

An AFP correspondent in Douma, the enclave's main town, saw a handful of people stealthily crossing rubble-strewn streets to assess damage to their property or look for food and water.

The bombing has been relentless since government and allied forces intensified their campaign on Sunday and rocket fire soon forced everybody to run for cover.

Exhausted and famished families cowered in cramped and damp basements, exchanging information on the latest casualties of the government's blitz.

Fresh strikes by the Syrian regime and its Russian ally, killed at least 38 civilians, including 11 children, according to the Syrian Observatory for Human Rights.

The latest deaths brought to 468 the number of people killed -- among them 108 children -- since the escalation of the bombardment of the besieged area on February 18.

More than 2,000 people have been wounded.

Rebels have been firing back into the capital Damascus, where a hospital was hit, the official Syrian news agency SANA said.

At the UN, US Ambassador Nikki Haley expressed dismay as negotiations dragged on to secure Russian approval for the ceasefire that would allow humanitarian aide deliveries and medical evacuations.

"Unbelievable that Russia is stalling a vote on a ceasefire allowing humanitarian access in Syria," Haley posted on Twitter.

"How many more people will die before the Security Council agrees to take up this vote? Let's do this tonight. The Syrian people can't wait."

Russia has vetoed 11 draft resolutions on Syria to block action that targeted its ally in Damascus. In November, it used its veto to end a UN-led investigation of chemical weapons attacks in Syria.

German Chancellor Angela Merkel and French President Emmanuel Macron wrote to Putin to ask him to back the ceasefire.

Negotiations have stumbled over a key provision of the draft resolution that specifies when the ceasefire will begin.

Following hours of tough negotiations, an amended draft resolution was circulated that demands a 30-day ceasefire "without delay," while stopping short of specifying the timing.

A previous draft had said the ceasefire would go into force 72 hours after the adoption, but that was dropped from the text in a bid to reach compromise with Russia.

In another concession to Russia, the draft also specifies that the ceasefire will not apply to operations against the Islamic State group or Al-Qaeda, along with "individuals, groups, undertakings and entities associated" with the terror groups.

World leaders have expressed outrage at the plight of civilians in Eastern Ghouta, which UN chief Antonio Guterres called "hell on earth", but have so far been powerless to halt the bloodshed.

"The UN says it is concerned and calls for a ceasefire, France condemns, but they have given us nothing," said Abu Mustafa, one of the few civilians on the streets of Douma Friday morning.

"Every day we have strikes, destruction. This would draw tears from a rock," said the 50-year-old, who was escorting a wounded person to hospital.

The enclave has been controlled by Islamist and jihadist groups since 2012.

The main rebel groups in Eastern Ghouta rejected any deal that would see them or other residents relocated.

"We categorically reject any initiative providing for inhabitants to leave their homes and be transferred towards any other location," they said in a letter addressed to Guterres.

The area is completely surrounded by government-controlled territory and residents are unwilling or unable to flee the deadly siege.

More than 340,000 people have been killed and millions driven from the homes in Syria's war, which next month enters its eighth year with no end in sight.