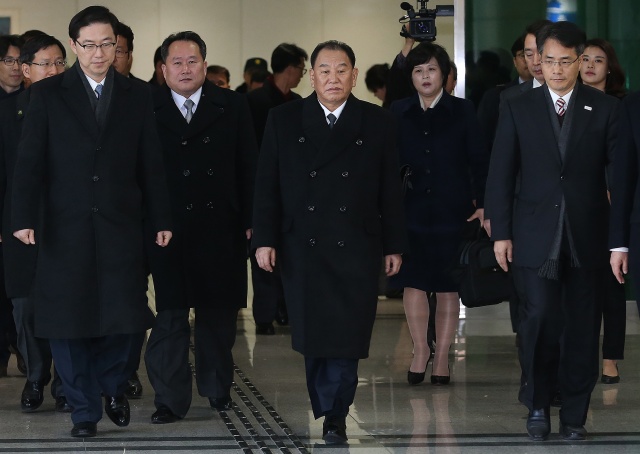 Kim Yong Chol (C), who leads a North Korean high-level delegation to attend the Pyeongchang 2018 Winter Olympic Games closing ceremony, arrives at the inter-Korea transit office in Paju on February 25, 2018. The blacklisted North Korean general arrived in the South on February 25 for the Winter Olympics closing ceremony, which will also be attended by US President Donald Trump's daughter Ivanka.  (KOREA POOL / AFP)

(AFP) - A blacklisted North Korean general arrived in the South on Sunday for the Winter Olympics closing ceremony, which will also be attended by US President Donald Trump's daughter Ivanka.

The visit by Kim Yong Chol, who led an eight-member high-level delegation that crossed the Demilitarized Zone in the morning, is the final piece of the Games-led diplomacy that has dominated headlines from Pyeongchang.

The nuclear-armed North has gone on a charm offensive in connection with the Olympics, sending athletes, cheerleaders and performers to the Games, with leader Kim Jong Un's sister Kim Yo Jong attending the opening ceremony.

Analysts say it is seeking to loosen the sanctions imposed against it over its banned nuclear weapon and ballistic missile programmes, and trying to weaken the alliance between Seoul and Washington.

But Kim Yo Jong had no interaction with US Vice President Mike Pence at the opening ceremony, even though the two were sitting just a few seats apart in the same VIP area, and according to the US, a planned meeting between the delegations from Washington and Pyongyang the following day was cancelled at short notice by the North Koreans.

South Korean President Moon Jae-in -- who has long pushed for engagement with the North to bring it to the negotiating table -- also did not immediately accept an invitation passed on by Kim Yo Jong from her brother to go to Pyongyang for a summit, saying the right conditions needed to be created.

Washington, which describes its approach to Pyongyang as "maximum pressure and engagement", announced a raft of new sanctions against it on Friday.

Pence also condemned Kim Yo Jong as part of an "evil family clique" and "murderous regime", prompting a denunciation from Pyongyang on Sunday, which said it would not talk to the Trump administration for "even 100 years or 200 years".

Television footage showed Kim Yong Chol, wearing a dark long coat, being greeted by Seoul's vice unification minister Chun Hae-sung before getting into a black sedan prepared by the South, while others boarded a bus and a van.

Kim's nomination as the leader of the group is controversial in the South, where he is widely blamed for a spate of attacks including the torpedoing of Seoul's Cheonan warship in 2010, with the loss of 46 lives. Pyongyang denies responsibility.

Conservative lawmakers staged an overnight protest near the border with the North, joined by hundreds of other activists.

Images showed the protesters waving banners including "Arrest Kim Yong Chol!" and "Kim Yong Chol should kneel in front of the victims' families and apologise!"

Kim is blacklisted under Seoul's unilateral sanctions against the North -- meaning he is subject to an assets freeze -- although he is not named in the UN Security Council's measures.

Officials from both Seoul and Washington say there will be no meeting between Kim Yong Chol and Ivanka Trump -- who is travelling with Korea specialists from the US administration and White House spokeswoman Sarah Sanders.

On Friday the US Treasury blacklisted 28 ships, 27 companies and one person, imposing an asset freeze and barring US citizens from dealing with them, in what Donald Trump described as the "heaviest sanctions ever" levied on Pyongyang.

Washington is also seeking to have the United Nations ban 33 vessels from ports worldwide and blacklist 27 shipping businesses for helping North Korea circumvent sanctions, in a bid to cripple North Korea's maritime network.

Kim Yo Jong's trip at the start of the Games -- the first visit to the South by a member of the North's ruling dynasty since the Korean War ended in 1953 with a ceasefire on the divided peninsula -- made global headlines.

But Pence told an audience of thousands at the Conservative Political Action Conference: "The sister of Kim Jong Un is a central pillar of the most tyrannical and oppressive regime on the planet, an evil family clique that brutalises, subjugates, starves and imprisons its 25 million people."

In the US, he added, "We stand up to murderous dictatorships."

Pyongyang denounced his comments Sunday, with the official Korean Central News Agency carrying a statement from the North's Korea Asia-Pacific Peace Committee saying Pence would discover "what quagmire his crazy remarks threw the US and himself into".

Trump, it said, should know that the North would "have no dealings with those viciously slandering the dignity of our supreme leadership and government".

"We will never have face-to-face talks with them even after 100 years or 200 years."

General » Be a reporter: Write and send your article » Subscribe for news alert
Tags: NKorea, SKorea