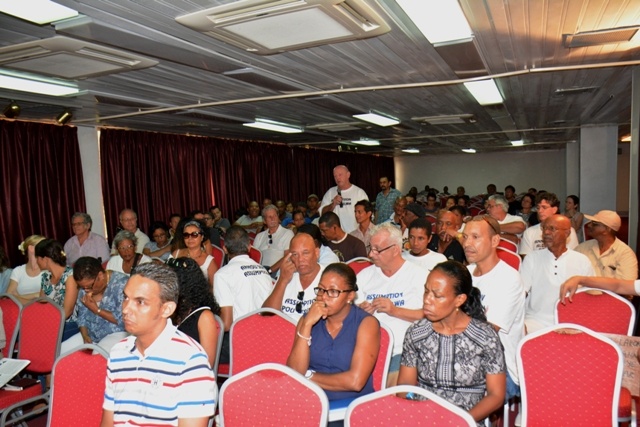 After the overview of the base, which would include an international airport, was given, people started to raise their concerns; all who spoke were against this facility. (Joena Meme)

(Seychelles News Agency) - The proposed Indian military base on Seychelles’ Assumption Island was strongly opposed at a first public meeting on Saturday. People opposing the project have demanded that a referendum is held to decide the future of the island.

The meeting organised by the government was held at the International Conference Centre in the capital city of Victoria and around a 100 concerned citizens attended.

A panel comprising of the Minister for Environment, Climate Change and Energy Didier Dogley, Secretary of State for Foreign Affairs Barry Faure, and Attorney General Frank Ally as well as two representatives from the Seychelles Peoples Defence Forces Michael Rosette and Leslie Benoiton -- led the meeting.

Before the meeting even started people present demanded a copy of the agreement. The Attorney General Frank Ally explained that the “agreement being a military one cannot be put in the public domain, but rest assured that the content of the agreement will be made available.”

Minister Dogley said the meeting was to present members of the public with the correct information with regards to what Seychelles has signed with India.

“We know that there are all sorts of information out there which is not necessarily the reality. The government is coming forth with this information. We wanted the Seychelles Peoples Defence Forces to make a presentation of what is being proposed as a military facility on Assumption,” said Dogley.

After the overview of the base, which would include an international airport, was given, people started to raise their concerns; all who spoke were against this facility.

One of the first people to speak was Guilmer Corgate, who said “if the Indians are funding the facility they will be in total control of the facility. I am against this project. No foreign country should take over any of our islands. I think the Indians are taking their fight with China away from their country and closer to ours.”

“This will need to go to the assembly for ratification but the voices of the Seychellois must be heard to ensure that there is no Indian military base on Assumption,” said Alain St Ange.

“How come India is willing to invest so much, in fact, millions and millions of dollars, to protect our little patrimony whilst half of its population live in poverty?” Monique Hermitte wanted to know.

Robert Ernesta said, “We simply do not want any foreign country to establish a military base on Seychelles land.”

Alexia Amesbury suggested that this issue is taken to the polls. “Before this agreement goes for ratification, why don’t the government gain the public’s opinion on the Assumption military facility through a referendum?”

Jean-Marc Lablache told SNA that a lot of information is missing from the proposal. “We are still not clear on the size, the type of facility. We are not certain of the cost as this will depend on type and size of the facilities.”

Lablache said that it was clear from the reactions during the meeting “that public opinion is against the permanent military presence in Seychelles.”

Seychelles and India signed a 20-year agreement in January that will enable the construction of military infrastructures on Assumption Island. The project will cover about a quarter of the remote island located 1,140 southwest of the main island of Mahe.

The meeting is the first in a series of regional public meetings organised by the government. Barry Faure said “most of the questions put forward today were answered. While some doubts were clarified and information was given. There are some participants who have called for and pushing for a referendum. This along with other points and concerns raised will be brought to the government.”

Faure said that “at this point what we can say as foreign affairs is that with such an agreement there is no need for a referendum as we have not leased the island, our island remains our sovereignty. We are only developing facilities which will allow us and India – our friendly neighbour – to develop our capacity where maritime security is concerned."

Also present at the meeting was the newly formed group, SAVE THE ALDABRA ISLAND GROUP, which is totally against the proposed military facilities. The group has been holding protests every Saturday in Victoria since the agreement was signed.

General » Be a reporter: Write and send your article » Subscribe for news alert
Tags: Seychelles Peoples Defence Forces, Indian military base, SAVE THE ALDABRA ISLAND GROUP