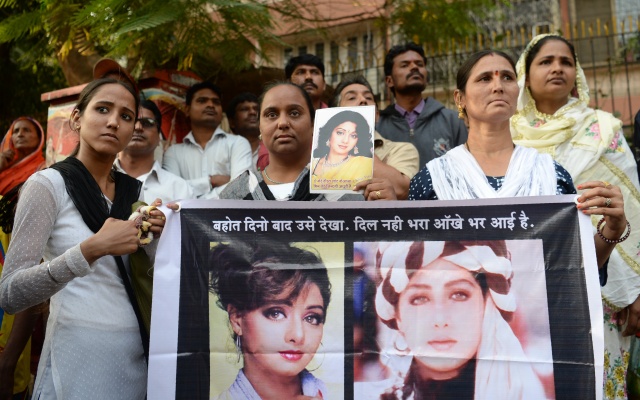 Fans hold pictures of late Bollywood actress Sridevi Kapoor as they stand outside her house before Sridevi's funeral in Mumbai on February 28, 2018. India has been mourning Bollywood superstar Sridevi Kapoor after her death in Dubai aged just 54, as police in the emirate said she drowned in her hotel bathtub. Sridevi -- one of the biggest names in Hindi cinema -- died late on February 24 after suffering a cardiac arrest in Dubai, where she had been attending her nephew's wedding. (PUNIT PARANJPE / AFP)

Some carried roses while others held photos of the late screen icon as they queued patiently to pay their final respects at a condolence service in the western Indian city.

"It's a shock to believe that she is no more. We want to pay her one last visit today and thank her for all her wonderful performances," Nandini Rao, a 32-year-old teacher, told AFP.

Legends of Hindi cinema, including actresses Aishwarya Rai and Kajol, were among the mourners at the Celebration Sports Club in the Andheri West area of Mumbai -- the home of the Bollywood film industry.

Heavy security lined the streets to control the crowds, which included people who had travelled hundreds of kilometres to be there.

Several fans chanted prayers as Sridevi's body was brought the short distance from her home to the club at 9:00 am (0330 GMT).

"I'm an avid Sridevi fan. I loved her smiling personality. She had such a commanding presence in the Indian film industry. Her death was so sudden and I feel terrible," 45-year-old Kuldeep Singh told AFP.

Sridevi's body is due to leave the ground at 2:00pm to embark on its final journey. She will be cremated at a private Hindu ceremony later on Wednesday.

Sridevi was considered to be one of the most influential Bollywood actresses of all time and her sudden death at the weekend sparked an outpouring of grief in India.

Tributes poured in from fans and fellow actors as well as Prime Minister Narendra Modi.

- Life in the spotlight -

The star of hit films such as "Chandi" and "Mr India" drowned in her bathtub after losing consciousness late Saturday in a hotel in Dubai, where she was attending a wedding.

Police in the emirate said a post-mortem examination found that she had drowned after losing consciousness. On Tuesday they ruled out any foul play and released the body to Sridevi's family.

It arrived back in Mumbai on a private jet on Tuesday evening, accompanied by her husband, the filmmaker Boney Kapoor, and her stepson, actor Arjun Kapoor.

Sridevi, born Shree Amma Yanger Ayappan in the southern state of Tamil Nadu, appeared in around 300 films and was awarded the Padma Shri, India's fourth highest civilian award, for services to the movie industry.

She made her acting debut at the age of four and her career spanned more than four decades.

Sridevi worked in India's regional Tamil, Telugu and Malayalam-language films before making her Bollywood debut in 1979.

She became a national icon with a string of blockbuster films including "Mawali" ("Scoundrel") and "Tohfa" ("Gift").

Sridevi took a 15-year break from the silver screen after marrying Kapoor but returned in the 2012 hit comedy-drama "English Vinglish". Her most recent film was last year's "Mom".

Sridevi was set to see Jhanvi, the eldest of her two daughters, make her Bollywood debut in a movie scheduled for release later this year.