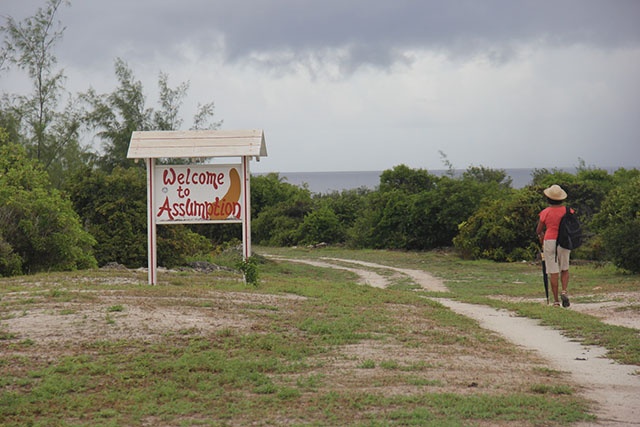 (Seychelles News Agency) - An environmental impact assessment is expected to be the next step concerning a proposal to build military infrastructure on the remote island of Assumption if Seychelles’ Parliament ratifies the agreement, a top official of the Department of Environment said.

The principal secretary of the Department of Environment, Alain De Commarmond, said that the project will have little environmental impact.

“The project will take place in an area with a vegetation of little environmental importance,” said De Commarmond, who accompanied a group of local journalists who visited the island on Tuesday. The visit was facilitated by the Island Development Company (IDC).

De Commarmond added that: “Whereas for the coral reef around the island, it will not be affected as the project will involve only the fixing of the jetty to accommodate vessels used by SPDF.”

Seychelles and India signedthe 20-year agreement in January that will enable the construction of military infrastructures on Assumption Island. The agreement, completely financed by the Indian government, also provides assistance to Seychelles.

In a presentation, the representative of the Seychelles Peoples Defence Forces (SPDF), Micheal Rosette, said that the Coast Guard base on Assumption is viewed by the SPDF as an ideal location.

“It will allow the Seychelles' military to better undertake surveillance of the EEZ and respond faster and more efficiently in cases of reported incidents in the area,” said Rosette.

According to the Secretary of State for Foreign Affairs, Barry Faure “the military base on Assumption will help enhance the military capabilities in control and maritime surveillance of the Exclusive Economic Zone (EEZ) of 1.37 million square km of Seychelles, an archipelago in the western Indian Ocean. It will also ensure the protection of the EEZ and the outer islands, and search and rescue in the region for the benefit of air and shipping traffic.”

Rosette said it would currently take over 40 hours to dispatch a coast guard vessel and three hours to dispatch a military surveillance plane if an incident occurred in the area. Rosette added that being stationed there would cut the response time to around four to five hours.

Rosette explained that the infrastructures will include “fixing up the existing airstrip built some 25 years ago to accommodate the SPDF air force plane on the island.”

Although the project will be financed by India, Rosette said that the Indian government will not be able to use the facilities for purposes of war or for the storing of weapons and nuclear arms.

The public relations manager of IDC, Micheal Payet, said that IDC is not involved in the signing of the agreement, but they “can share knowledge that they have on the island. “

Payet said that when construction starts “the part where the project will be undertaken will be surrendered to government, while the rest of the island will remain leased to IDC.”

The project is said to be still in the conception phase and there is no clear cost attributed to it at the moment. It will cover about a quarter of the remote island some 1,140 southwest of the Seychelles' main island of Mahe.