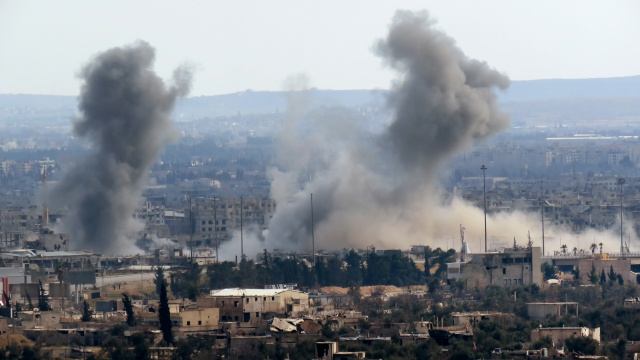 A picture taken from a government-controlled area on the outskirts of Harasta on the northeastern suburbs of Damascus on February 28, 2018, shows smoke rising from areas targeted by Syrian army shelling in the towns of Douma and Harasta. A "humanitarian pause" announced by Russia in Syria's deadly bombardment of Eastern Ghouta failed to end violence, with fresh bloodshed and no sign of aid deliveries or residents leaving the besieged enclave. (STRINGER / AFP)

(AFP) - About 40 trucks are loaded and ready to ferry relief supplies to Syria's bomb-and-siege shattered Eastern Ghouta, but there has been no let up in fighting despite a UN ceasefire resolution, a top UN official said Wednesday.

Mark Lowcock, the UN under secretary-general for humanitarian affairs, said there has been no change in the situation around the rebel-held enclave in the Damascus suburbs despite a ceasefire resolution Saturday.

"When will your resolution be implemented?" he asked, staring fixedly at members of the UN Security Council, who listened in complete silence.

Lowcock said trucks loaded with supplies have been poised to go to 10 besieged areas including Douma, the main town in the enclave, since Saturday.

But he said there has been no access for humanitarian convoys, nor authorization by the regime to go into the besieged areas, nor medical evacuations since the Security Council resolution was passed, he said.

On the contrary, the bombings have continued, and deaths and wounded have mounted, he said, speaking at a monthly Security Council meeting devoted to the Syrian conflict.

The US representative Kelley Currie accused the Syrian regime of violating the ceasefire, while Russian Ambassador Vassily Nebenzia accused the rebels.

Carl Skau, the deputy Swedish ambassador to the United Nations, demanded "immediate access" for the humanitarian aid. "There is no time to lose," he said.

Before the meeting began, French ambassador Francois Delattre recalled that the rebels in Ghouta had said Tuesday they were ready to observe a ceasefire, but the Syrian regime has given no sign it is ready to do the same.

"It is the collective credibility of the Security Council and the responsibility of each of its members that today is heavily at stake in the Syrian drama," he said.

"What we need is implementation of (resolution) 2401 and that is not happening," he said.

After a night of intense fighting on the periphery of Eastern Ghouta, Syrian aviation early Wednesday bombed several localities in the rebel enclave, where an estimated 600 civilians have died since February 18, about a quarter of them children, according to the Syrian Observatory for Human Rights.