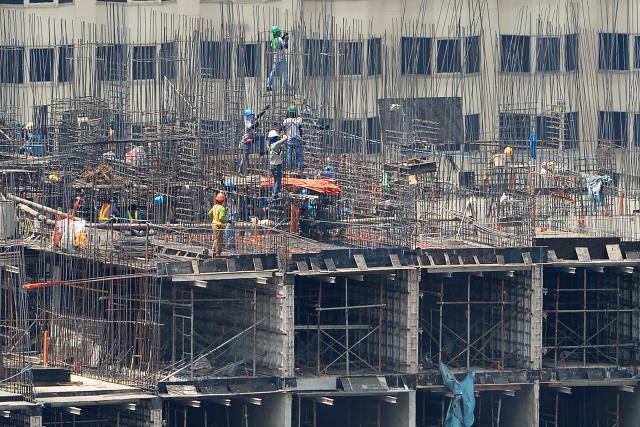 Workers stand on steel bars as they work at a construction site in Manila on May 18, 2017.  (Ted ALJIBE / AFP)

(AFP) - Steel and aluminium producers across Asia sank Friday on news of Donald Trump's controversial tariffs, though some analysts said the long-term effects on the sector might not be as bad as thought.

The president said Thursday he would slap levies of 25 percent on steel and 10 percent on aluminum imports, delivering an election campaign promise to put "America First" and protect US jobs from what he claims are unfair trade practices.

The announcement has been met with fury across the world -- even from those in his own Republican Party -- with warnings it could spark a painful global trade war, sparking a sell-off on equity markets already on edge over fears of rising US interest rates.

Leading the selling Friday were firms that produce or use steel and aluminium.

Tokyo-listed Nippon Steel and Sumitomo Metal dived more than four percent, and its smaller rival JFE Holdings was down 3.3 percent, with Rio Tinto in Sydney off 1.8 percent.

Japanese car giant Toyota fell 2.6 percent as it warned the car sector would be hurt and the measures would "substantially" increase the price of cars sold in America. Nissan fell 1.5 percent and Honda shed 3.8 percent.

"Traders are selling pinpointed steelmakers and automakers today in the wake of the remarks by Trump, at a time when sentiment has been hit by worries over US interest rates," Hikaru Sato, senior technical analyst at the investment strategy section at Daiwa Securities in Japan, told AFP.

And in Shanghai, Aluminium Corporation of China (Chalco) shed more than one percent while Baoshan Iron and Steel dropped 3.4 percent.

However, Sydney-listed Bluescope Steel, which exports steel to the United States and also has operations in America, was up more than 1.06 percent. The firm has sought to be exempted from the tariffs and says its steel mill in Ohio state could benefit from the import crackdown.

Analysts said that while there were initial sharp losses in the sector following the announcement, the main fear was what it could mean in the future.

"We think overall, the danger is contagion -- the reaction -- rather than the actual tariffs themselves," Fat Prophets resources analyst David Lennox told AFP.

"We don't know the details yet and it'll be the reaction of the countries where the tariff will be applied. Where or how will those countries retaliate? Because it will happen and that's what people worry about.

"If the countries all stand back and take it on the chin, then that's the end of it. Poor old US will get dearer steel and it'll cost them more to build things."