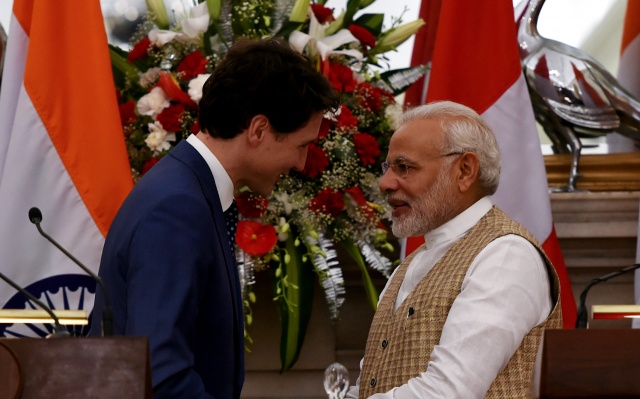 (AFP) - Canada's Prime Minister Justin Trudeau faced persistent criticism Thursday over a convicted Sikh extremist's attendance at a Canadian event in Mumbai, nearly a week after the premier's return from a trip to India.

Opposition parties and editorialists heaped scorn on the prime minister and his Liberal government over the "fiasco" that dogged Trudeau during his first official visit to India to drum up trade and investment.

Canadian-Indian businessman Jaspal Atwal was sentenced in Canada to 20 years in prison for a 1986 assassination attempt on an Indian politician, as part of a violent campaign to establish an independent Sikh state of Khalistan.

Yet, he managed to get himself invited to the Mumbai mixer as well as one to a dinner with Trudeau, which was rescinded at the last minute when Canadian media pointed out Atwal's criminal past.

Trudeau dodged questions about the scandal, saying that a senior member of his caucus had mistakenly extended the invitation.

Later, he defended his national security advisor who floated a theory that rogue political factions in India orchestrated the embarrassing invitation in order to make Canada appear sympathetic to Sikh extremism.

Trudeau has said he does not support Sikh extremists, despite appearing in several photographs with Atwal published by Canadian media -- while New Delhi has rejected the conspiracy theory put forward by Trudeau's top intelligence official.

In Montreal on Thursday, Trudeau repeated lines that he had rehearsed in parliament the day before: that he has "full confidence in Canada's national security agencies" and "when security officials say something to Canadians, it's because they know it to be true."

Canadian Sikhs number nearly 500,000 and account for roughly 1.4 percent of Canada's population, according to a 2016 census.

A handful of Canadian supporters of the Sikh nationalist movement were accused in the 1985 Air India bombings that killed 331 people, but only one person was ever convicted in the attack.

The movement was crushed in the 1990s.

Ujjal Dosanjh, a prominent moderate Sikh and a former Canadian Liberal minister, told AFP last week: "The movement was all but dead, but it has resurfaced in Canada in the last few years partly because Canadian politicians have been careless in associating with these people."