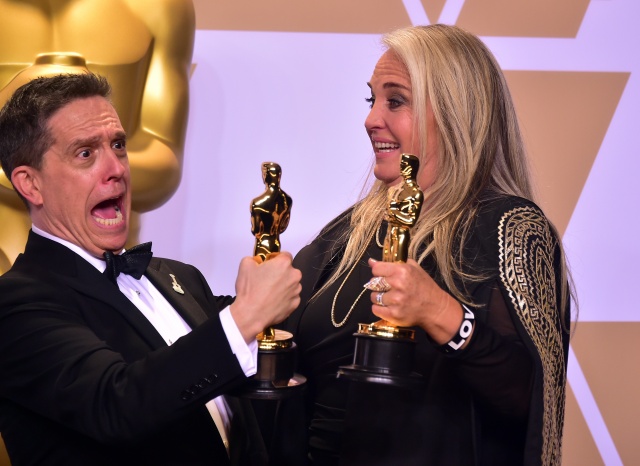 (AFP) - "Coco," which won viewers' hearts with the story of a little boy chasing his dreams against the backdrop of Mexico's colorful Day of the Dead festival, took the Oscar for best animated film Sunday.

The movie, which director Lee Unkrich has called a "love letter to Mexico," is the first that Disney-owned animation studio Pixar has devoted entirely to a foreign culture.

It was a risky bet in a year that saw Donald Trump become US president after a campaign laced with anti-Mexican rhetoric.

But it worked: the film has grossed $740 million worldwide, winning a Golden Globe, a BAFTA, two Critics' Choice Awards and now the Oscar.

The film also earned a Oscar for best original song for "Remember Me," by husband-and-wife duo Kristen Anderson-Lopez and Robert Lopez -- performed on Sunday by actor Gael Garcia Bernal and singers Natalia LaFourcade and Miguel.

The movie tells the story of Miguel, a young boy who longs to be a musician but is growing up in a family where music is forbidden because of a mysterious secret from the past.

Inadvertently, he ends up in the Land of the Dead, on a journey that takes him on a vivid tour of his family's past and, in the process, Mexican history and culture.

Unkrich said he did not set out to make the film political, but that events conspired to make its setting particularly relevant.

"When we began making this movie six years ago, it was a very different political climate," he said at a gala premiere in Mexico City in October.

"I think it's a good thing that it's coming out now, because there's been a lot of negativity in the world."

Pixar, which was bought by Disney in 2006, has now won 14 Oscars since its debut feature, 1995's "Toy Story," upended the genre with computer animation technology.

Exploding with the sights and sounds of Mexico's Day of the Dead -- brightly painted skulls, orange marigold flowers, "ranchera" songs -- "Coco" also gives cameos to many of the biggest figures in Mexican culture, from the painters Frida Kahlo and Diego Rivera to the actress Dolores del Rio and the wrestler El Santo.

The movie has been a huge hit in Mexico, where it is the highest-grossing film of all time.

It has also sparked booming demand for replicas of Miguel's white mother-of-pearl guitar, based on a model made by an artisan from the sleepy colonial guitar-making town of Paracho in western Mexico.

General » Be a reporter: Write and send your article » Subscribe for news alert
Tags: Entertainment, US, film, Oscars, animation, Coco