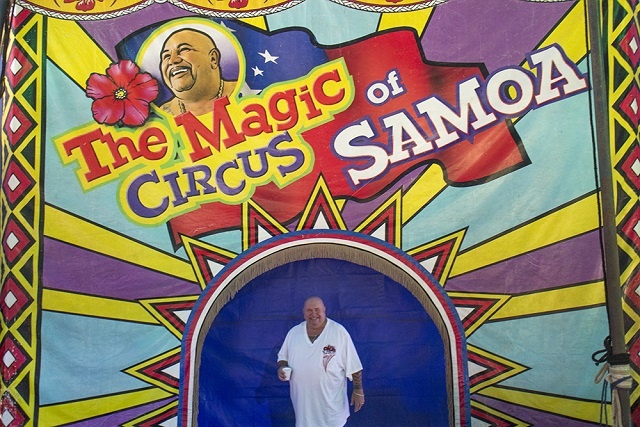 The Magic Circus of Samoa is in Seychelles for the third time. (Salifa Karapetyan, Seychelles News Agency)

(Seychelles News Agency) - A motorcycle stunt called the ‘Globe of Death’ is entertaining crowds in Seychelles.

The new attraction, brought to the island nation by the Magic Circus of Samoa, features one of the world’s oldest riders of the Globe of Death -- 77-year-old Indian stunt rider Rocky Valasan.

The Globe of Death is a circus and carnival stunt where riders ride motorcycles inside a  mesh metallic sphere. It is similar to the wall of death, but in this act, riders can loop vertically as well as horizontally.

Hailing from Kerala, a state in the south of India, Valasan said that he has been doing stunts since he was 11.

“I learned to ride since I was a small boy, both my mamma and papa were riders working with the circus back in India,” Valasan told SNA.

Valasan explained that it was only after the death of his father that he knew “that stunt riding was a way to earn their living.”

“For the past 46 years, I have been working with different circuses in India. But it is the first time that I am working outside of my country,” said Valasan who adds that he is really enjoying his tour with the Magic Circus of Samoa.

The stunt is new on the programme of the circus, which is visiting Seychelles – an archipelago of 115 islands in the western Indian Ocean - for the third time.

In this attention gripping stunt Valasan and two other riders ride the globe, captivating the audience’s attention, while the weakhearted ones look away.

Valasan said that he has no intention of stopping and “will continue as long as God allows” him.

Around 33 members -- Samoan and international acrobats, clowns, aerialists, jugglers, magician and trapeze artists -- are performing in the circus.

The chief executive and ringmaster of the circus, Bruno Loyale, who has been with the circus for many years, said that “even though some of the performers are the same who came in 2016, their acts are new.”

The only circus in the South Pacific, the Magic Circus of Samoa first came to the island nation in 2013, on its first tour of the Indian Ocean. On its second tour, the circus main attraction was the tallest man in the world -- Turkish Sultan Kösen.

Loyale said that this year’s tour has come with some challenges.  “The cost of shipping is four times what it used to be. The distance between Samoa, where we are based and the Indian Ocean, makes it very expensive to send our four containers of equipment here.”

Loyale said that it takes roughly five months for the containers to be shipped. He explained that this time the tour was delayed further with the cyclone in the region.

“We came here but all the equipment was stuck in Mauritius. But still, we had expenses and staff salaries to pay. We were fortunate and thankful that Ms. Rousseau from the National Sports Council, accommodated us at the Roche Caiman stadium.”

Loyale said that the present venue which has been allocated to them -- the ‘Vilaz Flamboyant’ on Bois de Rose Avenue on the outskirts of the capital city of Victoria -- is ideal for the circus.

“I am hoping that we can secure some sort of store space here for our bigger props and equipment. If that is a possibility the Magic Circus of Samoa can come to Seychelles every year,” said Loyale.

The circus will have its last show on March 18th and will go back directly to Samoa.

“We will not be going to the Maldives and Reunion like we usually do when we are on this tour. Back in the Pacific, we will be having shows in the French Polynesia islands,” said Loyale, adding that the circus performs at 28 different venues in that region.

The Magic Circus Samoa is having daily shows at 7 p.m. on week days. There are two shows on Saturdays at 2 p.m. and 7 p.m. On Sundays, there is only one show at 6. Tickets which are on sale daily costs from $9 to $20.