Tillerson heads to Africa, with China in his sights 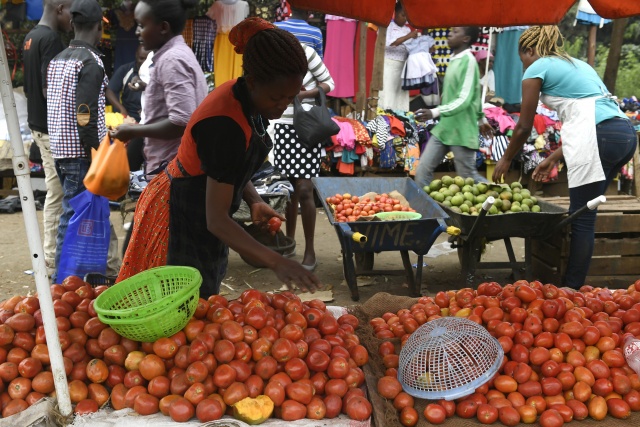 A woman sells tomatoes at the Kawangware market in Nairobi's central business district on January 11, 2018. US officials want to meet their Chinese counterparts to coordinate assistance to and investment in Africa, in particular to use its infrastructure building expertise. (SIMON MAINA / AFP)

Secretary of State Rex Tillerson's trip to Ethiopia, Kenya, Djibouti, Chad and Nigeria will take him to new battlefields in the United States' long war against Islamist extremism.

But looming over the journey will be a different and arguably more important long-term challenge -- the rise of China as an economic and diplomatic power to rival the West.

In a low-key speech to the George Mason University in Virginia before setting off, Tillerson insisted on the importance of Africa to America's interests.

"Our country's security and economic prosperity are linked with Africa's like never before," he said, noting the continent's rapid population increase and growing economies.

But he spoke mainly in generalities, and State Department officials played down the idea that the exploratory trip will produce any "deliverables."

Critics, meanwhile, stressed that recent US engagement with the continent has been led by the Pentagon and focused too narrowly on ongoing counterterrorism battles.

And they noted that Tillerson's own plan to slash the State Department budget for diplomacy and aid by 30 percent leaves him ill-prepared to match China's targeted investment.

Just as he had done before leaving for Latin America last month, Tillerson warned African countries that Chinese interest in their economies is not disinterested.

US officials want to meet their Chinese counterparts to coordinate assistance to and investment in Africa, in particular to use its infrastructure building expertise.

But China is already heavily involved in Africa and, for all its wealth, America is losing ground.

US exports to Africa fell last year to just under $22 billion, down from $38 billion in 2012, when Washington had a slight trade surplus with the continent.

In 2016, Chinese exports to Africa were more than $80 billion and imports from Africa less than half that.

Xi Jinping's government plans to give $60 billion in loans and export credits to African countries before 2020 and Chinese loans already far outstrip those of the World Bank.

Tillerson's department, meanwhile, submitted a 2019 budget request that would cut US health programs in Africa by a fifth and diplomatic programs by more than a third.

The US military, whose already huge budget is set to balloon still further, is already complaining that the US civilian commitment to Africa is lagging behind the competition.

General Thomas Waldhauser, head of US Africa Command, told US lawmakers on Tuesday that Washington "will never outspend the Chinese on the African continent."

The United States and French military bases in Djibouti preceded the Chinese one, but Beijing's presence in the country is unmistakable and welcomed by locals, he said.

"The Chinese are building facilities, they are building a shopping mall, they built a soccer stadium, they have built the infrastructure for communications," he said.

He noted that China had brought a hospital ship off Djibouti to provide basic care for local people and argued that the US could get a lot of mileage from doing "small things."

"We may not keep pace with the Chinese in terms of what they are doing, but at least our influence and our involvement there will not go away," he said.

There will be strong positive symbolism on the trip. Tillerson's visit to Chad -- a key US military partner -- will be the first by a sitting secretary of state.

Tillerson has yet to appoint an assistant secretary of state for African affairs and eight US embassies in Africa have no ambassadors, including key players South Africa and Egypt.

And President Donald Trump caused upset on the continent when he reportedly referred to African countries as "shitholes" from which the US ought not to accept immigrants.

So, as Africa growth expert Brahima Coulibaly, a senior fellow of the Brookings Institution, argues, of the "three Ds" of engagement -- defense, development and diplomacy -- only one is properly resourced.

Tillerson arrives in Ethiopia on Wednesday and returns to Washington on March 13.

General » Be a reporter: Write and send your article » Subscribe for news alert
Tags: US, Africa, diplomacy