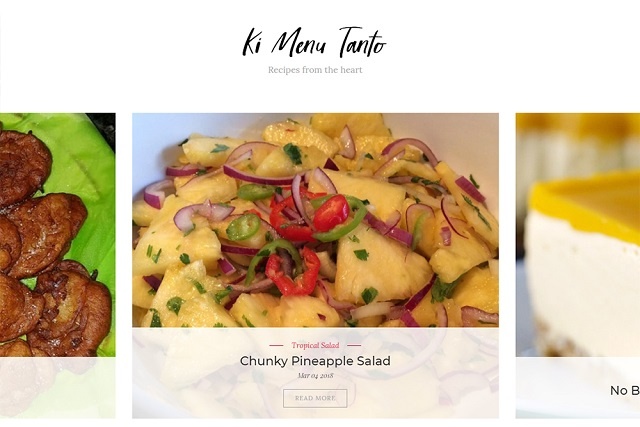 (Seychelles News Agency) - A Seychellois Facebook cookery group -- ‘Ki Menu Tanto’ -- that promotes the culinary endeavours of its over 23,000 members has launched its own website.

Marie-Rose Lepathy -- the founder of the ‘Ki Menu Tanto’ group (Creole for what’s in your pot tonight) -- told SNA that it was a former colleague, Jeannine Gilbert-Finnigan, now residing in the United Kingdom, who proposed setting up a website.

“She is also a member of ‘Ki Menu Tanto’ and offered her help with creating the website as we had a lot of members desiring for recipes,” said Lepathy.

The website -- www.kimenutanto.com -- was officially launched on March 3 and comes three years after the successful launch of the social media page. It offers a melting pot of recipes, mostly Creole cuisine with a touch of other cuisines from around the world.

Compared to the Facebook group, which features pictures of meals prepared at home by amateurs and professional cooks, the website is a collection of the best postings on Facebook. With the permission of the members, it has also added the recipes which include traditional Creole cuisine and international ones.

“We have been receiving lots of positive responses so far because our members could not wait to get their hands on the succulent recipes,” said Lepathy.

She said that ‘Ki Menu Tanto’ is a reflection of her family’s passion for cookery. With the help of some friends namely Adrian Morel and Eliza Mathiot she set up the page in 2015 and with so much appreciation, the Facebook group was established the following year.

Lepathy believes that ‘Ki Menu Tanto’ is a chance for people to share their culinary creativity.

“Amateur members post whatever they prepare in their kitchen from a simple fried fish with rice to a work of art from a professional cook, but mind you we have amateurs who post amazing dishes, they display amazing talent,” she said.

A fan of the page, Kelly Samynadin, says that browsing through the posts makes her mouth water. “It is the best group on Facebook so far. Although it doesn’t promote healthy eating, it helps bring people from various walks of life together.”

The opinion is shared by many including Nyla Gonthier, who feels the group motivates her to do more.

“It's super exciting to just be able to post my dish and get others’ opinions and suggestions. I think if you hate cooking by just being in the group you would really want to try to cook something,” she said.

Lepathy and her team plan to involve the group members of ‘Ki Menu Tanto’ in several other plans in future.

“We even had suggestions from members to do a food fiesta, picnic, charity works and even cookbooks but chaque chose a son temps (one thing at a time),” she said smiling.

A taste of the islands opens on the UK coast: Seychelles Gastronomy