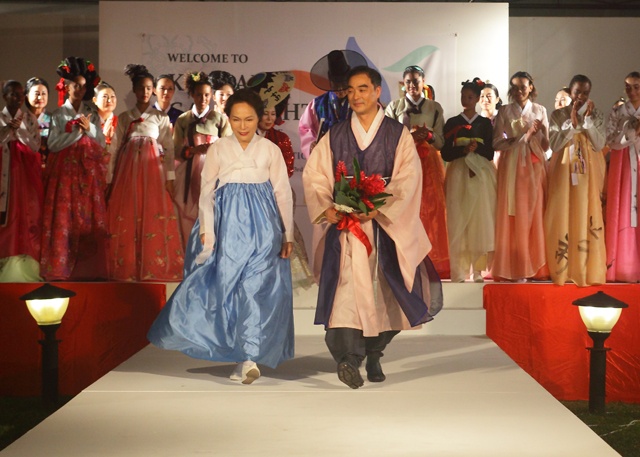 The Korean Hanbok Fashion show was also held in Seychelles in 2010 and 2012, under the patronage of Dong Chang Jeong, Seychelles honorary consul general for South Korea and head of the Seychelles tourist office in Seoul.

“I’ve been to Seychelles three times so far. It inspires me through its vibrant color, pristine nature, and the warmth of people. I am destined to study, inherit, and further develop Korean culture, especially costumes. I believe understanding one country’s culture helps bringing the two countries closer. In my case, it is through Korean costumes to bring Korea and Seychelles closer and more friendly through my shows,” said Kim Hye-soon in an interview with SNA.

In Korea, some women wear Hanbok, traditional Korean dresses, for weddings and traditional festivals, however with the popularity of the historical TV dramas, the Hanbok style is seen more often at parties and other celebrations.

Kim Hye-soon rose to fame when she designed the costumes for the Korean Broadcasting ServiceTV series 'Hwang Jin Yi' which became a hit as a historical drama, through the story of 16th century female entertainer and artist, of the Joseon Kingdom. Hye-soon also created the Korean traditional costumes for opera Toji (Land) and movies Seopyonje and Cheonnyeonhak.

She has held fashion shows in the USA, UK and Russia. In 2011, Hye-soon held a hanbok fashion show at Metropolitan Museum In New York, where UN secretary-general Ban Ki-moon and former US President Bill Clinton were present.

Hye-soon has was also selected as one of 10 world designers to work with the Italian luxury fashion brand Fendi.

Lifestyle » Be a reporter: Write and send your article » Subscribe for news alert
Tags: Hanbok, Korea