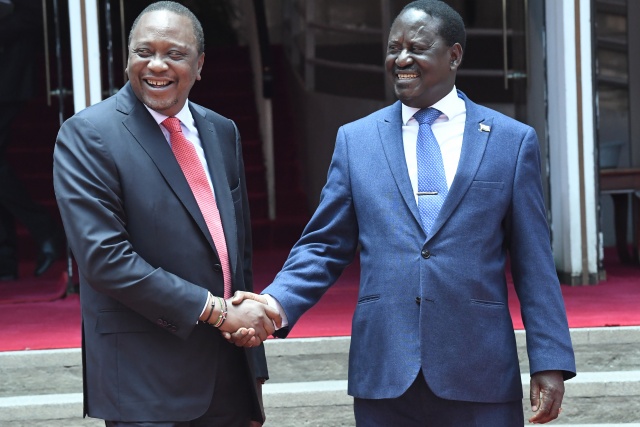 The surprise meeting at Kenyatta's downtown office on Friday ended with the symbolic appearance of the two men standing side-by-side to deliver a joint statement.

Calling one another "brother," they announced a plan for "a programme" to overcome deep and long-standing ethnic and political divides, although they provided few details of what it might involve.

"Throughout our independence history, we have had doubts on how we have conducted our affairs in the face of growing divide along ethnic, religious and political lines. Regrettably, we have responded to our challenges by mostly running away from them," said Odinga, who spoke first.

"The time has come for us to confront and resolve our differences."

Friday's meeting came hours before the arrival of US Secretary of State Rex Tillerson as part of his first Africa tour. The US has been urging direct talks between Kenyatta and Odinga to resolve the political strife.

Tillerson later described the meeting as "a positive step".

"While we know addressing Kenya's ethnic and political divisions will take some time and effort, today both of these men showed great leadership in coming together and in the agreement they signed," he told a press conference in Nairobi after meeting with Kenyatta.

But Tillerson also warned against democratic backsliding, urging the government to, "correct certain actions, like shutting down TV stations and threatening the independence of the courts."

Last year's fraught election season saw one presidential poll annulled by the courts and the re-run boycotted by the opposition.

While political violence did not come close to that which followed the 2007 vote -- when over 1,100 lives were lost -- the disputed elections led to the deaths of over 100 people, most of them shot by police.

"Kenyans went from high hopes for these elections to many disappointments and confrontations. Kenya remains deeply divided," EU chief observer Marietje Schaake, a Dutch member of the European parliament, told AFP as the critical report was launched.

General » Be a reporter: Write and send your article » Subscribe for news alert
Tags: Kenya, politics