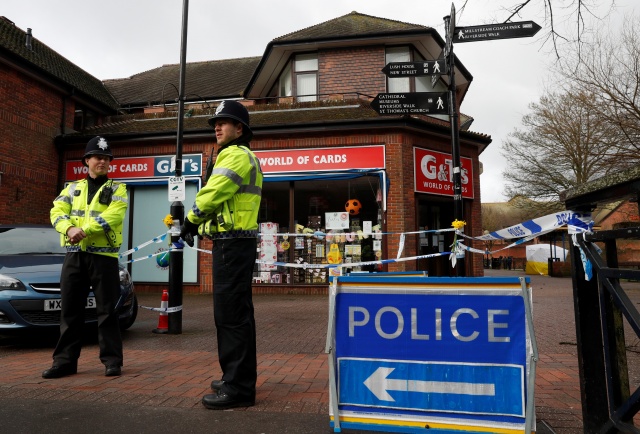 Police officers stand on duty at a cordon near a bench covered in a protective tent at The Maltings shopping centre in Salisbury, southern England, on March 12, 2018, where a man and woman were found critically ill on March 4, after being apparently poisoned with what was later identified as a nerve agent sparking a major incident. British Prime Minister Theresa May will chair a meeting of her national security team Monday after weekend confirmation that traces of a nerve agent used in the attempted murder of former Russian spy Sergei Skripal, and his daughter Yulia, were found in a pub and a restaurant they visited.(Adrian DENNIS / AFP)

(AFP) - Britain's Theresa May will be updated on Monday by her national security team about the nerve agent poisoning of a former Russian double agent amid fears of contamination among the wider public.

The prime minister will chair the latest meeting of the national security council just over a week after Sergei Skripal and his daughter Yulia were taken to hospital in the southwestern English city of Salisbury.

Senior politicians have pointed the finger at Russia for trying to kill the 66-year-old, who sold secrets to Britain and later moved here in a 2010 spy swap, prompting angry denials from Moscow.

May so far has declined to cast blame, but several newspaper reports suggested she could make an announcement after the NSC meeting, naming Russia and setting out how Britain intends to respond.

"We are expecting to see the prime minister make an announcement soon," Tom Tugendhat, a lawmaker who chairs the House of Commons foreign affairs committee, told BBC radio.

"And, frankly, I would be surprised if she did not point the finger at the Kremlin."

Possible responses include the expulsion of some of Russian diplomats, some kind of boycott of the 2018 football World Cup or an increased British military presence in Eastern Europe.

Foreign Secretary Boris Johnson has floated the deepening of sanctions against Russian officials, but this would require international agreement.

Tugendhat warned that any escalation in tensions between London and Moscow could put at risk England fans visiting Russia for the World Cup.

"I'm afraid the danger of Russia responding to British fans for actions taken by their government is all too real," he said.

Skripal and his daughter, 33, were found slumped on a bench outside a shopping centre on March 4, and remain in a critical but stable condition in hospital.

A police officer who attended the scene was also taken to hospital but is sitting up and talking.

Authorities have yet to confirm the precise nerve agent used, which would give a clue to who was behind the attack that they are treating as attempted murder.

The bench, Skripal's home and a pub and restaurant the pair visited have all been sealed off, as has the grave of Skripal's wife, Liudmila, who died in 2012.

Health authorities have repeatedly said there is no immediate risk to the public.

However, England's chief medical officer on Sunday said that up to 500 people who may have come into minimal contact with the nerve agent should wash their clothes and belongings as a precaution.

"We have now learnt that there has been some trace contamination by the nerve agent in both The Mill pub and Zizzi's restaurant in Salisbury," Sally Davies said.

She said she was "confident" nobody else at those places was harmed but said there were concerns that prolonged exposure to these substances over the long-term may cause health problems.

The new advice surprised Salisbury residents, even while health authorities insisted the risk to the general public remains low.

"It's been a week. We really need to know what's going on. It's either really, really bad or it's not," Debbie Power told the Daily Telegraph newspaper.

"If it's as serious as what they are saying, then I doubt washing your clothes is going to make a big difference," Margaret Cowie told the Guardian.

Around 180 troops, including chemical warfare experts, have been deployed in Salisbury to help the probe.

Skripal was a colonel in Russia's military intelligence who was jailed in his country for betraying agents to Britain's MI6 secret service.

Last week, Johnson said the attack on Skripal had "echoes" of the 2006 radiation poisoning of former Russian spy and Kremlin critic Alexander Litvinenko, which a British public inquiry blamed on Moscow.