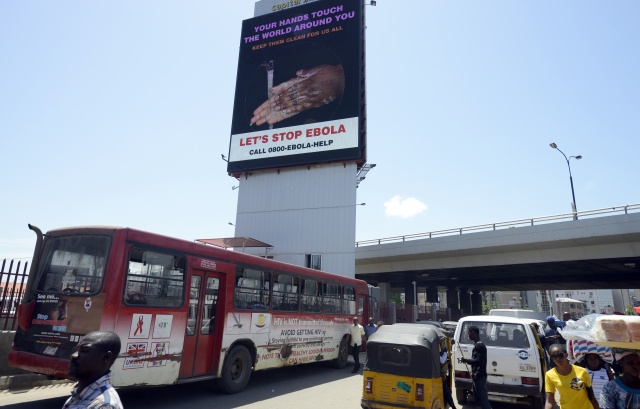 People walk past an information board on Ebola at Obalende district of Lagos on October 20, 2014. Africa's most populous nation Nigeria is battling on two fronts against an unprecedented outbreak of Lassa fever, a cousin of Ebola, that has already killed 110 people this year. (AFP PHOTO/PIUS UTOMI EKPEI)

(AFP) - Nigeria is battling on two fronts against an unprecedented outbreak of Lassa fever, a cousin of Ebola, that has already killed 110 people this year.

Even as doctors are grappling to contain the threat, health watchdogs are struggling to understand why the deadly virus has spread so dramatically.

The Nigeria Centre for Disease Control (NCDC) has confirmed 353 Lassa cases since January 1, compared with 143 cases for the whole of 2017.

But the possible reasons for this surge are many, said NCDC director Chikwe Ihekweazu.

"The harder you look, the more you find," he said, citing a change in the virus's environment, viral mutation -- and better reporting of cases by the public in response to awareness campaigns.

Lassa fever is an acute viral haemorrhagic disease that can be transmitted to humans from infected rat faeces or urine.

Like the notorious Ebola -- but thankfully somewhat less contagious -- it can also be passed from one person to another via contact with infected bodily fluids.

Full protective gear for medical personnel is vital and isolation is essential.

A visit to the Lassa fever isolation ward at the Irrua Specialist Teaching Hospital in southern Edo State -- the only such unit in a country of 190 million people -- provides a snapshot of the practical difficulties in tackling the peril.

Before the unit was built in 2008, suspect blood samples were sent to South Africa for an accurate diagnosis -- but when the results came back it was already too late, doctors say.

Despite its unique status, the Lassa facility, staffed by a dozen Nigerian employees and a handful of European tropical medicine specialists, is struggling.

In normal times, it treats just a couple of dozen patients each year. But since the start of 2018, the unit has already admitted more than 150.

"Now we have just below 30 patients," said director Ephraim Ogbaini-Emovon. "We never recorded this (in previous years). Facilities are overstretched."

Dead rats in jars of formaldehyde decorated the corridors of the small clinic. Inside the isolation ward, the temperature was stifling at above 40°C (104°F) degrees.

Kevin Ousman, who specialises in combating viral risks at the World Health Organization (WHO), spends his days reminding people of basic protection.

"Change your gloves!" Ousmane orders. "Throw away this water! Don't put this bag on the floor."

In front of the hospital, surgical gloves and syringes spill out of the trash bins onto the grass.

"Given the situation we're living here, we are going right down to the basics," Ousmane tells AFP as doctors come and go clad from head to toe in protective suits.

A striking sight is that of relatives trying to care for their loved ones. Many come wearing just flip-flops and a simple facemask when they visit a patient in the isolation ward.

"It's a tradition in Africa for families to take care of their sick," a WHO employee remarks. "But we have to put a stop to that, it's much too risky."

Wilson Oherein had heard only vaguely of Lassa fever before his wife contracted the disease, to die of it a few days ago.

Their three-year-old daughter was also contaminated by Lassa fever and she was being cared for in the isolation ward at Irrua.

Oherein usually spends his days at his daughter's bedside and feeds her. He also takes her soiled garments and washes them in a bucket. But this afternoon, he is resting in a half-finished building behind the hospital, with other family members of patients.

He is lying, exhausted, on a mat on the floor. "I will be fine," he tries to convince himself, his forehead beaded with sweat. "I'm just anxious for my daughter and the mourning of my wife. It knocks me down."