Pressure grows on Japan's Abe over scandal as support melts 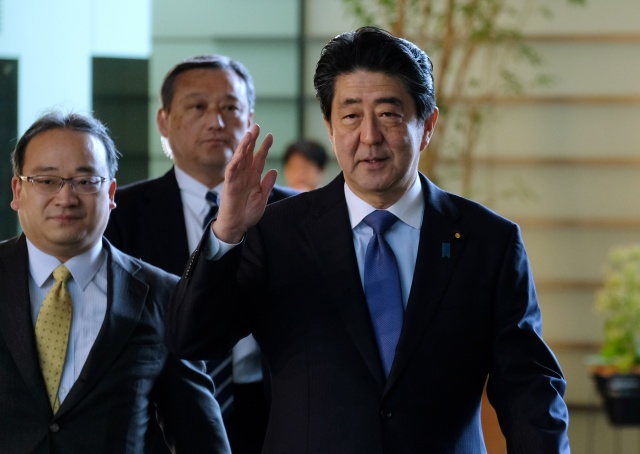 (AFP) - Pressure mounted Tuesday on Japan's Prime Minister Shinzo Abe over a ballooning cronyism and cover-up scandal, as a new poll showed his support at the lowest level since his re-election in October.

Abe and his finance minister Taro Aso have been on the ropes in recent days following revelations that key documents relating to a controversial land sale were doctored before being sent to MPs.

Aso was forced to fend off opposition calls to resign on Monday after admitting his ministry altered 14 sets of documents sent to parliament.

The scandal surrounds the 2016 sale of state-owned land to a nationalist operator of schools who claims ties to Abe and his wife Akie.

The sale was clinched at a price well below market value amid allegations that the high-level connections helped grease the deal.

Abe and Aso both apologised "deeply" over the affair amid signs the PM's popularity is suffering six months before he stands for re-election as head of the ruling LDP party.

A new poll released by public broadcaster NHK Tuesday showed support for the Abe government dropped to the lowest since he won a resounding re-election in October.

Commentators said the survival of Aso, a close Abe ally and deputy prime minister, was key to the leader's own ability to stay in the job.

Aso has been at the centre of the Abe administration since its start in December 2012, playing a key role in the prime minister's trademark "Abenomics" economic policy.

"If Aso leaves the government, the cabinet would surely be destabilised," the Yomiuri Shimbun said Tuesday.

Adding to the sense of political crisis in Japan, Aso hinted he might skip a Group of 20 finance ministers' meeting next week in Buenos Aires, saying his attendance "depends on the situation of the current parliament".

Meanwhile, opposition lawmakers stepped up their offensive, boycotting parliament debates while demanding key figures in the scandal including Abe's wife Akie, be summoned to testify.

They have threatened to continue parliamentary boycotts until they receive "the full disclosure of truth" over the scandal.

Aso has blamed lower level officials, but opposition lower house member Satoshi Arai tweeted Tuesday it is "impossible to do this without approval by (Aso's) secretariat".

Abe has previously vowed to resign if he is found to have had links to the disputed land sale and attention is already turning to his bid to be re-elected head of the LDP -- and therefore prime minister.

Media attention has focused on the criminal nature of altering public documents with many saying bureaucrats would not have done this without political pressure.

"Doctoring public documents is an act that shakes the foundation of democracy," said the Asahi Shimbun.

One key official linked to the scandal was found dead last week in a suspected suicide.

His family has urged authorities to get to the bottom of the scandal.