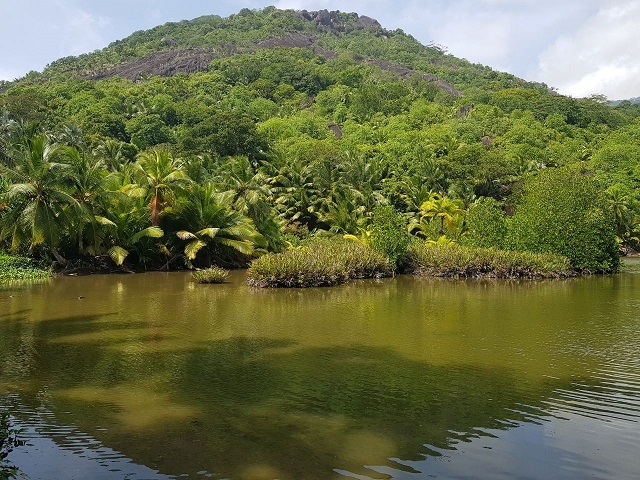 (Seychelles News Agency) - Silhouette is the third-largest granitic island of Seychelles -- an archipelago in the western Indian Ocean.

The island lies 20 km northwest of Mahe -- the main island -- and is accessible by boat and helicopter.

This week’s buzz brings you 10 amazing things which set the island’s resort -- Hilton Seychelles Labriz Resort and Spa opened in 2011 -- apart from other island resorts.

A protected area and nature reserve

With its land area of 20 square kilometres, Silhouette is a nature reserve and protected area. The island's surrounding waters were declared a Marine National Park in 1987. In 2010, Silhouette National Park was created, protecting 93 percent of the landmass.

The island is one of the richest biodiversity points in the western Indian Ocean with many endemic and threatened plant and animal species. Among the most important is the critically endangered Seychelles sheath-tailed bat. Three roosting caves have been located and 32 bats recorded.

Most of the 75 or so endemic plants of the granitic islands of Seychelles are found on Silhouette, some of them unique to the island. One of the rarest of these is the critically endangered impatiens gordonii a white-flowered relative of the well-known garden plant Busy Lizzie, only ever recorded on Mahe and Silhouette.

Silhouette is mountainous with five peaks over 500 metres (1,600 ft) in elevation. These include Mont Dauban 751 metres (2,464 ft) which is the second-highest mountain of Seychelles.  Mont Dauban is named after the Dauban family, who owned the island until 1960.

The whole of Silhouette has been classified as an Important Bird Area, mainly because of the population of 10-20 pairs of Seychelles kestrel. Other land birds include three more endemic ones -- Seychelles blue pigeon, Seychelles bulbul and Seychelles sunbird.

In 1771 Charles Oger took possession of the island which was named after Etienne de Silhouette, who was the controller general of finances in France in the reign of Louis XV.  Until 1960, the island was owned by the Dauban family, who were originally from France but had settled in Mauritius in 1830. A number of them lived on the island including Auguste Dauban, Joseph Francois Dauban, Edouard Dauban and Charles Dauban. The Dauban era came to an end when Henri Dauban sold the island to a French group in 1960. There is a family mausoleum built in the style of La Madeleine in Paris, Église de la Madeleine.

The island is rumoured to be the resting place of several Arab seafarers, leading to one of the beaches being named ‘Anse Lascars’, the Creole name referring to Arabs. Not a far-fetched idea when one realises that pirates once roamed this part of the Indian Ocean.

The Dauban plantation house - also known as Grann Kaz - was built by Auguste Dauban in 1860. The 158-year-old testimony of the “Grand Blanc” era now stands as a Creole restaurant managed by the island’s only hotel, Hilton Silhouette Labriz. The upstairs is used as a museum tracing the Daubans’ arrival to the island to the death of Henri Dauban, the last heir to live on the island. A few items of furniture left behind by the family after the island was sold to the Seychelles Government can also be seen in the museum.

A hideaway for marrons

It was believed that in 1800, slaves who escaped – also known as marrons - the plantations of their owners on Mahe created a new life for themselves on Silhouette, becoming the island’s first permanent inhabitants. One of these marrons, by the name of Domingue, also known as Machabee, became a legend amongst the unhappy slaves of Seychelles.

His name is commemorated in a place on Mahe, and the name of a river on Silhouette. In the early years of settlement, Machabee escaped to Silhouette with two companions. While the two others were caught Machabee could not be caught and it is believed he settled down to a relatively peaceful life on Silhouette.

Hidden treasure, waiting to be discovered

Another popular legend is that Silhouette is one of the possible resting-places of a substantial treasure hidden by Jean-Francois Hodoul, a former French captain turned wealthy businessmen who lived the latter days of his life on Mahe, the most-populated island of the archipelago.