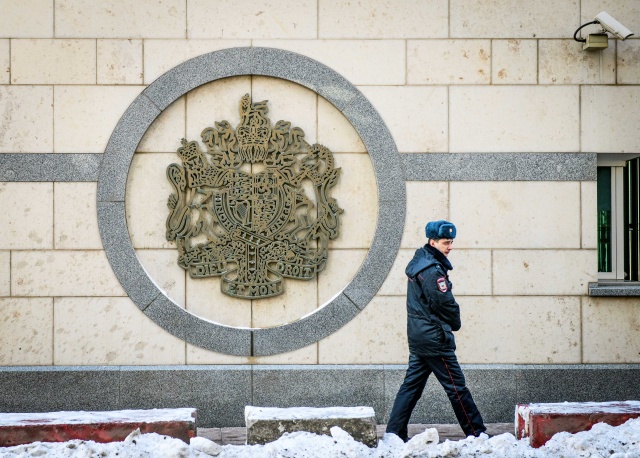 A Russian police officer walks past the United Kingdom state emblem outside its embassy in Moscow on March 6, 2018. The Kremlin said Tuesday it had no information on a former Russian double agent who fell ill in Britain after exposure to an unknown substance, calling the incident "tragic." (Mladen ANTONOV / AFP)

(AFP) - Britain expelled 23 Russian diplomats over the nerve agent poisoning of a former spy, and suspended high-level contacts, including for the World Cup, as the US joined it in blasting Moscow at the UN on Wednesday.

British Prime Minister Theresa May told Britain's parliament that Russia had failed to respond to her demand for an explanation on how a Soviet-designed chemical, Novichok, was used in the English city of Salisbury on March 4.

At an emergency meeting of the UN Security Council in New York, America sided firmly with Britain, rejecting Moscow's claim that it was not involved in the attack on Sergei Skripal and his daughter.

"The United States believes that Russia is responsible for the attack on two people in the United Kingdom, using a military-grade nerve agent," US Ambassador Nikki Haley told the meeting held at Britain's request.

The White House also issued a statement that the US "stands in solidarity with its closest ally".

It added the incident "fits into a pattern of behaviour in which Russia disregards the international rules-based order, undermines the sovereignty and security of countries worldwide, and attempts to subvert and discredit Western democratic institutions and processes".

NATO allies have expressed their support for Britain following the first use of a nerve agent in Europe since World War II.

"There is no alternative conclusion other than that the Russian state was culpable for the attempted murder of Mr Skripal and his daughter," May told parliament.

"This represents an unlawful use of force by the Russian state against the United Kingdom."

May said 23 Russian diplomats believed to be intelligence officers must leave Britain within a week.

Britain also suspended all planned-high level contacts, including an invitation for Foreign Minister Sergei Lavrov to visit, but May said she did not want to break off relations entirely.

She vowed to clamp down on Russians suspected of "hostile state activity", freezing assets for those in Britain and detaining those arriving at the border.

Neither members of the royal family nor ministers will attend the football World Cup in Russia later this year.

Alexei Sorokin, the chief of the World Cup organising committee, said the boycott would have "no impact on the quality of the tournament".

"It is every fan's choice whether to come or not."

Analysts said it was a softer response than initially expected, but allowed for further retaliation if necessary.

Jonathan Eyal, of London's RUSI military think tank, said it was a "first step" in Britain confronting Moscow, given May chose not to expel the Russian ambassador to London, nor initiate a complete cut-off in relations.

"So in many respects the prime minister was keeping some ammunition dry for a future confrontation," he added.

Britain's Defence Secretary Gavin Williamson will call for additional military spending in a speech Thursday, according to the Daily Telegraph.

"In the face of intensifying threats, we must prioritise investment in military capabilities," the paper reported he will say.

"We cannot sit back and let events overtake us."

On Monday May said it was "highly likely" that Russia was behind the attack, which left Skripal and his daughter in a critical condition and a policeman also in hospital.

She said Moscow could be directly responsible or may have "lost control" of the nerve agent, and gave it until midnight Tuesday to disclose details of the Novichok programme to the international Organisation for the Prohibition of Chemical Weapons (OPCW).

On Wednesday, she said Russia had responded with "sarcasm, contempt and defiance".

Moscow has said it is willing to cooperate but has accused Britain of failing to follow its own obligations for the investigation under OPCW rules, complaining that its request for samples of the nerve agent have been rejected.

"The British government made a choice for confrontation with Russia," the foreign ministry said, accusing London of pursuing a political agenda.

At the United Nations, Russian Ambassador Vassily Nebenzia repeated Moscow's denials and suggested the attack was a provocation aimed at tarnishing Russia's image ahead of the World Cup and elections.

"France's solidarity with the UK is unquestionable," the French Embassy in London said Wednesday, noting two country's leaders "will discuss the matter yet again this Thursday".

In a joint statement by its 29 member states, the US-led NATO alliance said the attack was a "clear breach of international norms and agreements" and called on Russia to fully disclose details of the Novichok programme.

EU Council President Donald Tusk offered his "full solidarity" and indicated the issue would be on the agenda of next week's summit in Brussels.

British experts say Skripal, 66, and his 33-year-old daughter were poisoned with a nerve agent from a broad category known as Novichok, which was developed by the Soviet Union during the Cold War.

The case has drawn parallels with the 2006 death by radiation poisoning of former Russian agent and Kremlin critic Alexander Litvinenko, which Britain blamed on Moscow.