US hits Russia with sanctions for election meddling 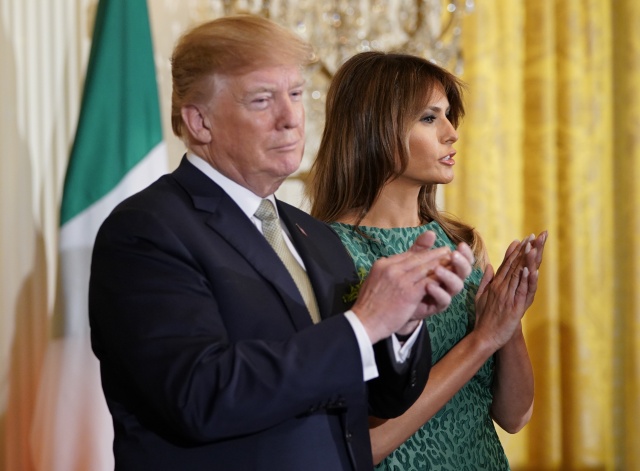 (AFP) - Donald Trump's administration levied sanctions against Russia's top spy agencies and more than a dozen individuals Thursday for trying to influence the 2016 US presidential election and two separate cyberattacks.

The announcement follows a lengthy delay, which had caused anger on Capitol Hill and raised questions about President Donald Trump's willingness to confront Moscow.

The measures target five entities and 19 individuals -- including the FSB, Russia's top spy service; the military intelligence agency, or GRU; and 13 people recently indicted by Robert Mueller, the US special counsel handling a sprawling Russia probe.

Sanctions were also levied against individuals behind the separate Petya cyberattack and an "ongoing" attempt to hack the US energy grid.

The move comes despite Trump's repeated denial that Russia tried to tilt the election in his favor, fearing it could call his victory over Hillary Clinton into question.

The US president has also decried more damaging allegations that his campaign colluded with the Kremlin -- the subject of Mueller's ongoing investigation that has seen several key aides indicted or make plea deals.

Many of the main entities and individuals hit -- including the spy agencies and alleged "troll factory" boss Yevgeny Prigozhin -- already face asset freezes and travel bans, either put in place under former president Barack Obama's administration or for actions linked to Russia's actions in Ukraine.

Leading Democratic Congressman Adam Schiff said the sanctions "fall far short of what is needed to respond to that attack on our democracy let alone deter Russia's escalating aggression."

He added: "These targeted sanctions are a part of a broader effort to address the ongoing nefarious attacks emanating from Russia."

Senior administration security officials said more sanctions are on the way and denied the response had been tardy.

Moscow said it was preparing its response.

He claimed the US move was designed to coincide with Russia's presidential election on Sunday.

The decision heaps pressure on Moscow as it faces separate punitive measures for an alleged attempt to kill a Russian-born British informant with a nerve agent west of London.

Britain, France, Germany and the United States condemned the attack on the Russian ex-spy and his daughter, saying there was "no plausible alternative explanation" to Moscow's involvement.

Trump said Thursday he had spoken with British Prime Minister Theresa May about the case.

"We are in discussions," he said. "A very sad situation. It certainly looks like the Russians were behind it. Something that should never, ever happen, and we're taking it very seriously."

Moscow has denied being involved, claiming the British government was trying to "deflect attention" from difficult negotiations with the European Union over Brexit.

On Thursday The New York Times reported that special counsel Mueller had subpoenaed the company founded by Trump to turn over documents including some related to Russia.

In an interview with the Times last July, the president said that the special counsel would be crossing a "red line" if he probed his family's finances beyond any relationship with Russia.

The firm's lawyer Alan Futerfas said it was "fully cooperative with all investigations, including the Special Counsel, and is responding to their requests."

General » Be a reporter: Write and send your article » Subscribe for news alert
Tags: US, politics, security, Russia, Trump