Global biodiversity 'crisis' to be assessed at major summit 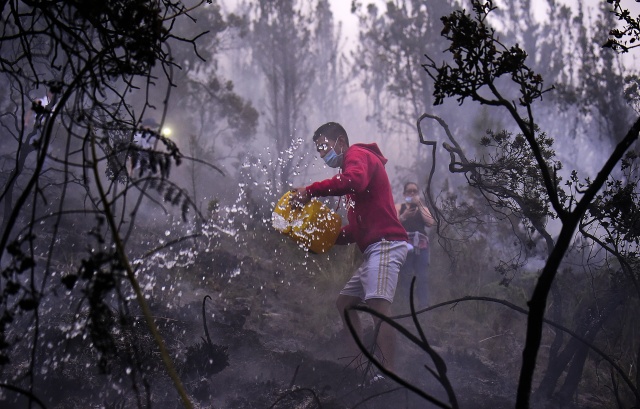 (FILES) In this file photo taken on February 2, 2016 people try to put out a forest fire in Bogota. Earth is enduring a mass species extinction, scientists say -- the first since the demise of the dinosaurs and only the sixth in half-a-billion years. The reason? Humanity's voracious consumption, and wanton destruction, of the very gifts of Nature that keep us alive and healthy. For example 1,200 Colombian species are listed as threatened, due partly to pollution and forest-destruction caused by illicit drug production. Starting on March 17, 2018, a comprehensive, global appraisal of the damage, and what can be done to reverse it, will be conducted in Colombia. (LUIS ACOSTA / AFP)

(AFP) - Earth is enduring a mass species extinction, scientists say -- the first since the demise of the dinosaurs and only the sixth in half-a-billion years.

The reason? Humanity's voracious consumption, and wanton destruction, of the very gifts of nature that keep us alive.

Starting Saturday, a comprehensive, global appraisal of the damage, and what can be done to reverse it, will be conducted in Colombia.

"The science is clear: biodiversity is in crisis globally," WWF director general Marco Lambertini told AFP ahead of a crucial meeting of the Intergovernmental Science-Policy Platform on Biodiversity and Ecosystem Services (IPBES).

"We depend on biodiversity for the food we eat, the water we drink, the clean air we breathe, the stability of weather patterns, and yet our actions are pushing nature's ability to sustain us to the brink."

Scientists and government envoys will gather as the 128-member IPBES to dot the i's and cross the t's on five monumental assessment reports designed to inform global policymaking into the future.

Compiled over the last three years, the reports will provide the most up-to-date picture of the health of the world's plants, animals and soil.

The diagnosis will be unveiled in two parts at the summit in Colombia's second-largest city, Medellin.

First, on March 23, the IPBES will simultaneously release separate assessments for the four regions into which it has divided the world -- the Americas, Africa, Asia-Pacific, and Europe and Central Asia.

A fifth report, due March 26, will focus on the global state of soil, which is fast being degraded through pollution, forest-destruction, mining, and unsustainable farming methods that deplete its nutrients.

The end product covers the entire Earth apart from Antarctica and the open oceans -- those waters beyond national jurisdiction.

Meeting host Colombia claims to boast the world's largest variety of birds and orchids and is second only to Brazil in terms of overall species diversity.

Paradoxically, decades of conflict have preserved fragile habitats in no-go zones in the country, whose mountainous topography supports 311 different ecosystems.

But 1,200 Colombian species are listed as threatened, due partly to pollution and forest-destruction caused by illicit drug production.

More than just a portrayal of doom and gloom, the latest assessments will include projections for future recovery or decline, and "suggestions for action," IPBES executive secretary Anne Larigauderie told AFP.

The expert panel, she explained, had compiled five assessment reports, each about 600-900 pages long.

Each of these was then condensed into a 20-30 page "summary for policymakers".

These summaries must be officially adopted in Medellin before being sent to IPBES member states to guide policymaking in areas that affect biodiversity -- everything from transport and infrastructure to farming, water management and education.

The reports are not prescriptive, but "we hope that this will help inform policy decisions to stem the loss of biodiversity and the fundamental services it provides us with," chief scientist Tom Brooks of the International Union for the Conservation of Nature told AFP.

After opening formalities on Saturday evening, delegates will hunker down for days of intense, "word-by-word" negotiations on the five summary documents.

The drafts in their current form will be put to a joint IPBES meeting on Sunday, after which delegates will meet in five groups -- one for each report.

Governments will have a final chance to request changes to the wording of the summaries. If the scientific authors disagree, a compromise must be found through negotiation.

"It is likely that there would be quite a few discussions," said Larigauderie.

"It may be that there are some countries that might not be satisfied by what the report says about the state of their biodiversity."

Any changes to the summaries adopted in Medellin will be incorporated into the full reports, which will be published only after the conference in the six official UN languages.

The whole process has cost about $5 million (four million euros).

Experts and governments have had several opportunities to consider successive phases of the reports, and suggest changes.

"Thousands of people have provided thousands... of comments," said Larigauderie.

This complex drafting process, she added, is crucial to get as many governments as possible on board, for a better chance of them adopting biodiversity-friendly policies as a result.

"Not only the conclusions of a report are important, but also the process leading up to them," she said.