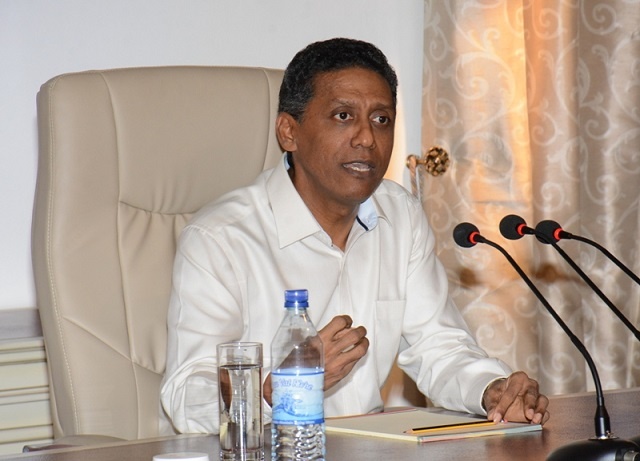 Agreement for military facilities on Assumption

Since late January when Seychelles and India signed an agreement to build military facilities on Assumption, the project has been met with a lot of criticicism. In his reply to the President’s State of the Nation Address, the leader of the opposition, Wavel Ramkalawan announced that all Member of the National Assembly of ‘Linyon Demokratik Seselwa’ (LDS) will not ratify the agreement as is.

In response to this, Faure said that he will meet with Ramkalawan on March 26 to discuss aspects of the agreement that the opposition leader does not agree to.

“I will use this opportunity to understand what exactly he has to say and once this is clear, as the president I will be able to take a decision on what the next step will be when it comes to the agreement,” said Faure.

He said that an explanation should have been given to the public before the signing of the agreement took place.

Faure also outlined that there is a need for a coast guard facility on Assumption that will help alleviate the drug trade issues that the country is facing.

Concerns about a non-working cohabitation

The president said that the cohabitation system is what the people of Seychelles wanted, adding that there is no need to “reinvent the meaning of the term.”

“If we want to redefine cohabitation because someone at some point in time said that cohabitation is not working, I think that we are making an inappropriate political mistake,” said Faure.

He outlined that the National Assembly has approved several bills and passed two budgets since its first sitting in September 2016. Faure says that this is proof that the cohabitation is working.

“Let us be honest and say that there are weaknesses but that things are dynamic and moving,” he said, adding that as the president, he will continue to hold dialogues with all members of the opposition.

Tunnels will not be funded by taxpayer’s money

In his address on the State of the Nation, Faure said that there are plans to build two tunnels on Mahe. Since the announcement, there have been responses saying that the money to be used in the project should be injected into other sectors such as health and road development.

“These remarks are justifiable but the president did not however say that he is going to use money from the budget to build the tunnels,” said Faure.

He explained that once operational, there will be a company that will manage the tunnels and all the money collected will be paid to that particular company.

“If the president had said that he is going to use public funds to realise these projects, then I would have said that you have all the rights to criticise the president. However, not a cent will come from the government's coffers to build or maintain the tunnels,” he said.

Explaining the idea behind the projects, Faure said, “We are going to build a dam in Grand Anse with almost the same capacity as that of La Gogue dam and to build that dam you need material.”

“Construction materials such as rocks are limited in the country and yet we still need to keep on developing,” he added.

General » Be a reporter: Write and send your article » Subscribe for news alert
Tags: State of the Nation Address, Member of the National Assembly