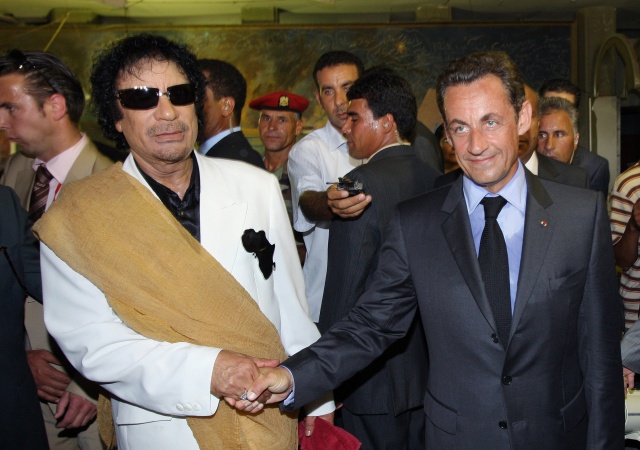 (FILES) In this file photo taken on July 25, 2007 French president Nicolas Sarkozy shakes hands with Libyan leader Moamer Khadafi (L) upon his arrival for an offcial visit to Libyain Tripoli. Former French president Nicolas Sarkozy has been called in for questioning by investigators looking into suspected Libyan financing of his 2007 election campaign, a source close to the inquiry told AFP on March 20, 2018. (Patrick KOVARIK / AFP)

(AFP) - French ex-president Nicolas Sarkozy was detained for questioning on Tuesday over allegations the late Libyan dictator Moamer Kadhafi financed his 2007 election campaign, including with suitcases stuffed with cash, a source close to the inquiry told AFP.

Sarkozy, 63, was taken into police custody early Tuesday morning and was being questioned by officers specialising in corruption, money laundering and tax evasion at their office in the western Parisian suburb of Nanterre.

His car left the parking lot at midnight, according to an AFP correspondent, but it was unclear whether he was inside. Under French law he can be held for 48 hours.

AFP's source said that Brice Hortefeux, a close ally and a senior minister during Sarkozy's presidency, was also questioned Tuesday. He was later released.

The case is France's most explosive political financing scandal and one of several legal probes that have dogged the rightwing politician since he left office after one term in 2012.

Since 2013, investigating magistrates have been probing media reports, as well as statements by Kadhafi's son Seif al-Islam, that claimed funds were provided for Sarkozy's run at the presidency.

"Sarkozy must first give back the money he took from Libya to finance his electoral campaign," Seif told the Euronews network in 2011 as NATO-backed forces were driving his father out of power.

Sarkozy has dismissed the allegations as the rantings of vindictive Libyan regime members who were furious over France's military intervention in Libya that helped end Kadhafi's 41-year rule and led to his death.

He has also sued Mediapart, which has led media coverage of the Libyan allegations since 2012, publishing a document allegedly signed by Libya's intelligence chief showing that Kadhafi had agreed to fund Sarkozy to the tune of 50 million euros ($62 million).

The case drew heightened scrutiny in November 2016 when a Franco-Lebanese businessman admitted delivering three cash-stuffed suitcases from the Libyan leader in 2006 and 2007 as contributions towards Sarkozy's first presidential run.

In an interview, again with Mediapart, Ziad Takieddine claimed he dropped 1.5 to 2 million euros in 200-euro and 500-euro notes each time and was given the money by Kadhafi's military intelligence chief Abdallah Senussi.

When asked about the allegations during a televised debate in 2016, Sarkozy called the question "disgraceful" and said the businessman was a "liar".

The legal investigation is looking into these allegations, as well as a 500,000-euro foreign cash transfer to Sarkozy ally Claude Gueant, and the sale of a luxury villa in 2009 in the south of France to a Libyan investment fund for an allegedly inflated price.

Sarkozy's lawyer refused to comment but Gueant's lawyer Philippe Bouchez El Ghozi told AFP: "There are no elements in the case that justifies a spectacular measure like custody.

"After five years of investigations they haven't been able to prove that Nicolas Sarkozy received even a cent from Libya," he said.

Sarkozy, who takes a hard line on radical Islam and French identity, was nicknamed the "bling-bling" president during his time in office for his flashy displays of wealth.

He failed with a bid to run again for president in November 2016 and has stepped back from frontline politics since then, though he remains a powerful figure behind the scenes at the right-wing Republicans party.

The Republicans party offered its "full and complete support to former president Nicolas Sarkozy" in a statement.

Seven months after his 2007 presidential victory, Sarkozy invited Kadhafi to Paris and clinched major arms and nuclear energy sales to the oil-rich north African country, which has since descended into civil war.

Tuesday's detention was not the first for Sarkozy: he became the first French president to enter police custody in July 2014 over a separate inquiry into claims that he tried to interfere in one of the several investigations targeting him.

He faces up to a year in prison if convicted, but he is appealing the decision to send him to trial, claiming he knew nothing about the fraudulent practices that Bygmalion executives have admitted to.