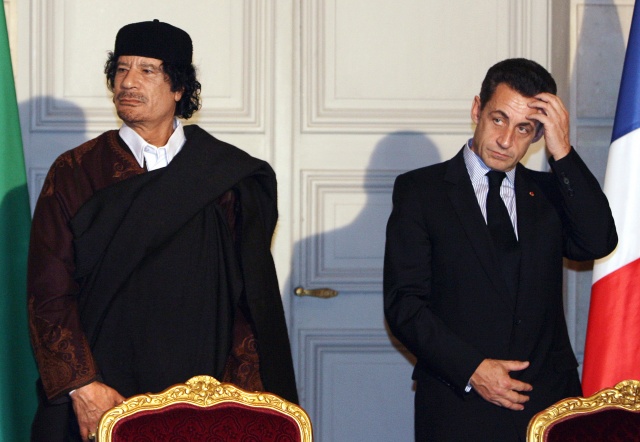 (FILES) In this file photo taken on December 10, 2007 French President Nicolas Sarkozy (R) and Libyan leader Moamer Kadhafi pose during the signature of 10 billion euros of trade contracts between the two countries at the Elysee Palace in Paris. French ex-president Sarkozy was put in custody on March 20, 2018 in relation to campaign financing, according to a court source. (Patrick HERTZOG / POOL / AFP)

After five years of investigation and two days of questioning the rightwinger in police custody, judges looking into France's most explosive political scandal decided they had enough evidence to charge the 63-year-old.

The combative one-term president, who served from 2007-2012, was charged with corruption, illegal campaign financing and concealment of Libyan public money, the source added. He returned home Wednesday after being placed under court supervision.

Sarkozy denies the charges, which are the most serious out of the myriad investigations that have dogged him since he left office in 2012.

He will have six months to appeal the charges, which is he is likely to do, and the judges will have to make a further decision about whether they have sufficient proof to take the case to trial.

He was first taken into custody in the Nanterre suburb west of Paris on Tuesday morning before returning for another grilling on Wednesday morning.

Since 2013, investigators have been looking into claims by several figures in Kadhafi's ousted regime, including his son Seif al-Islam, that Sarkozy was on the take in 2007 from the man he helped topple four years later.

He is already charged in two separate cases, one relating to a system of fake invoices devised to mask overspending on his failed 2012 election campaign and another for alleged influence peddling involving a judge.

His right-wing Republicans party has so far backed him publicly.

"Friendship and loyal support to Nicolas Sarkozy in this test," the treasurer of his 2007 campaign, Eric Woerth, tweeted.

One of the party's lawmakers in northern France, Sebastien Huyghe, told BFM television he believed Sarkozy was the victim of "vengeance" by ex-Libyan regime members and by the French judiciary, with which he had a fraught relationship as president.

But there have been signs of unease among some senior conservatives who fear being contaminated by the mounting allegations against him.

Brice Hortefeux, a Sarkozy ally who was a top minister during his presidency, was also questioned Tuesday.

"Mr Hortefeux again assured that there was no financing from Libya or any foreign country," his lawyer Jean-Yves Dupeux told AFP.

In 2011, as NATO-backed forces were driving Kadhafi out of power, Seif al-Islam told the Euronews network that "Sarkozy must first give back the money he took from Libya to finance his electoral campaign."

Sarkozy has dismissed the allegations as the rantings of vindictive Kadhafi loyalists who were furious over the French-led military intervention in Libya that helped end Kadhafi's 41-year rule and ultimately led to his death.

The former French leader has also sued the investigative website Mediapart, which has led media coverage of the Libyan allegations since 2012 when it published a document allegedly signed by Libya's intelligence chief showing that Kadhafi had agreed to fund Sarkozy to the tune of 50 million euros ($62 million).

The case drew heightened scrutiny in November 2016 when a Franco-Lebanese businessman admitted to having delivered three cash-stuffed suitcases from the Libyan leader in 2006 and 2007, when Sarkozy was preparing his first run for president.

The revelations came as Sarkozy was trying to make a comeback.

Ziad Takieddine claimed he provided 1.5 to 2 million euros in 200-euro and 500-euro notes each time and was given the money by Kadhafi's military intelligence chief Abdallah Senussi.

The legal investigation is looking into these allegations, as well as a 500,000-euro foreign cash transfer to Sarkozy's former interior minister Claude Gueant and the 2009 sale of a luxury villa in the south of France to a Libyan investment fund for a suspiciously high price.

Businessman Alexandre Djouhri, an associate of Sarkozy's, sold the property for 10 million euros to a fund managed by Kadhafi's ex-chief of staff Bashir Saleh.

In January, Djouhri was arrested off a flight at Heathrow airport and appeared in court in London on suspicion of fraud and money laundering linked to the French probe.

In July 2014 Sarkozy became the first former French president to be taken into police custody over a separate inquiry into claims that he tried to interfere in another of the myriad investigations that have dogged him since leaving office.

He failed in his comeback bid for the presidency in November 2016 and has stepped back from frontline politics since then, but he still holds considerable influence with the Republicans party.

He is not the first former president to be charged with corruption, however.

In 2011, his conservative predecessor Jacques Chirac was given a two-year suspended sentence for embezzlement and misuse of public funds.