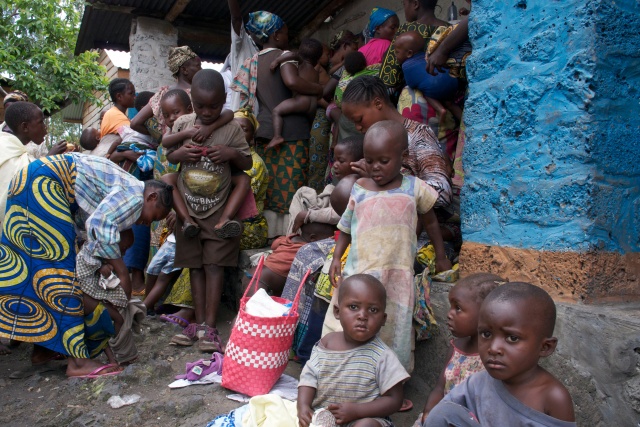 Children and their mothers wait for a nutritional assistance on October 9, 2013 at the Caritas health center in Mugunga, 10 km west of Goma in the North-Kivu province of the Democratic Republic of the Congo. (AFP PHOTO/MARC JOURDIER)

(AFP) - A humanitarian crisis in the Democratic Republic of Congo is worsening and has reached catastrophic levels in some parts of the country, with millions facing severe hunger, the UN Security Council warned Thursday.

At least 13.1 million Congolese are in need of humanitarian aid including 7.7 million who are severely food insecure, said a unanimous statement from the top UN body.

The humanitarian crisis has been compounded by a doubling over the past year of the number of Congolese fleeing violence in the country who now total close to 4.4 million.

Council members "expressed great concern over the deteriorating humanitarian situation, which has reached catastrophic levels in some parts of the country", said the statement.

The council "emphasized the need to address the presence of armed groups in the country" and renewed its call for "transparent, credible and inclusive elections".

Kinshasa authorities have set a date of December 23 to hold historic elections but it remains unclear whether President Joseph Kabila, in power since 2001, will step aside to allow a transition.

UN officials fear the country could slide into all-out violence as the countdown to the elections begin.

An international conference will be held in Geneva on April 13 to mobilize funding for a $1.7 billion humanitarian appeal for the DR Congo -- four times the amount secured last year.

The United Nations has declared the humanitarian crisis in the DR Congo to be a Level 3, the UN's highest-level emergency.

The council statement followed a meeting on Monday on the crisis.

At that meeting, the US head of the international development agency, Mark Green, said the Kabila government had done "so little to alleviate suffering, even as many of its leaders have apparently been lining their pockets."

The Kabila family owns either partially or wholly more than 80 of the largest businesses in the country and more than 450 miles of diamond concessions, Green said, quoting the Congo Research Group.