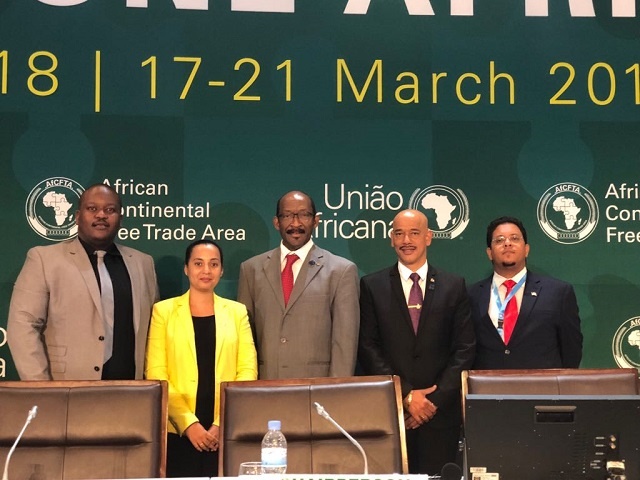 (Seychelles News Agency) - Seychelles is one of 44 African countries to have signed the first African Continental Free Trade Area (AfCFTA) agreement that will help members trade with fewer challenges.

The signing of the agreement took place during the Extraordinary Summit of the African Union (AU) in Kigali, Rwanda on March 21. Out of 55 member countries of AU, 44 signed the agreement.

On the agenda of the summit was the discussion and signing of the agreement aimed at establishing a free trade zone for African countries. If successful, it will be the biggest trade agreement since the setting up of the World Trade Organisation in 1995.

Seychelles’ Vice President, Vincent Meriton, who headed the delegation at the summit, told reporters on Friday that this agreement will allow the local private sector to export and import products as well as services with fewer barriers.

“It will allow the private sector to tap into a market with a population of over 1 billion people, with a GDP worth over $3.4 trillion,” said Meriton.

Talking about the quality of good that will enter the country, the principal secretary for trade, Cilla Mangroo, said that “free trade will not mean that substandard goods will be coming into the country.”

“Regardless of the trade regime we will have circumstances where substandard goods will be coming in, but this is where our institutions such as Seychelles Bureau of Standard, the National Biosecurity Agency and the Seychelles Public Health Authority come in,” said Mangroo.

She added that Seychelles will have to put in place internal policies to regulate the standards of goods coming in.

Moving forward, countries that have signed the document need to ratify it.

“For Seychelles, this means that we need to submit the agreement to the National Assembly for them to consider it and take a decision,” said Meriton, adding that his office envisions that this will happen before the year ends.

Before Seychelles signed the document, consultation meetings were conducted with the private sector to show them the possibility and benefits that the agreement can bring to the country.

The African Continental Free Trade Area brings together 55 countries. To come into force, the agreement needs to be ratified by 22 countries. Among the countries yet to sign the agreement is Nigeria, Africa's largest economy, and South Africa.

During his intervention at the summit, Meriton said that the free trade area echoes “our commitments towards African Trade Integration, building into Agenda 2063 for a more Prosperous Africa.”

One that is “based on inclusive growth and sustainable development. This is especially important for us, small island African states who face the ongoing realities of limited resources and small market size,” he added.

Meriton said that the agreement allows Seychelles, an archipelago in the western Indian Ocean, to develop the capacity of the private sector and the opportunity has to be used.

“One of the existing opportunities is to gain a lease on a piece of land in an Africa country for farming. Such offers have already been made and it must be noted that there are Seychellois who have farms in Zambia for example,” said the Vice President.