Clashes in Catalonia after Puigdemont arrested in Germany 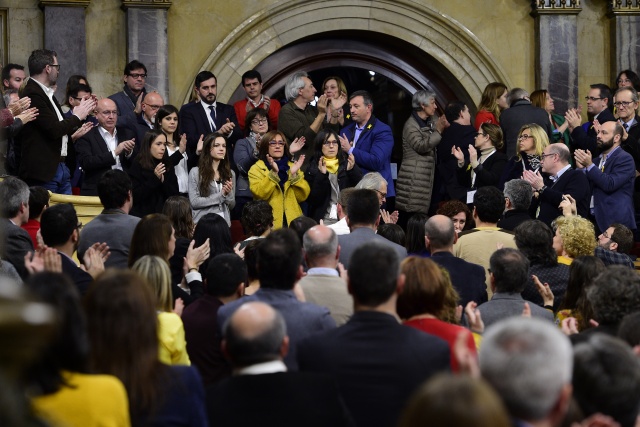 Family members of jailed Catalan leaders including Meritxell Lluis (back C), wife of Josep Rull, Diana Riba (C-R), wife of Raul Romeva, and Blanca Bragulat (C), wife of Jordi Turull, along with their daughters (L) applaud at the end of a parliament session that was due to hold an investiture vote but became a symbolic session to discuss the region's political crisis in Barcelona on March 24, 2018. Five Catalan separatists were placed in custody by the judge investigating the region's breakaway bid, the Supreme Court said on March 23. Catalonia remains under direct rule from Madrid, which was imposed after the region declared independence in October. (LLUIS GENE / AFP)

(AFP) - Thousands of Catalan separatists faced off with police in Catalonia on Sunday following the arrest in Germany of the region's former president Carles Puigdemont five months after he fled Spain.

Catalan police decked out in riot gear shoved and hit demonstrators with batons to keep the crowd from advancing on the office of the Spanish government's representative in Barcelona, the capital of the wealthy northeastern region.

Officers fired warning shots in the air to try to contain the demonstrators, who pushed large recycling containers towards police. Some people threw glass bottles, cans and eggs at police.

Seventy-nine people were injured during the clashes in Barcelona, mainly with bruises, including 13 police officers, emergency services said.

Another seven people were injured at a protest in Lleida, about 150 kilometres (90 miles) west of Barcelona and one person was injured in Tarragona to the south.

"I have no doubt that Catalan society will act as it always has, with non-violence," he said.

German police earlier arrested Puigdemont as he crossed the border with Denmark by car, responding to a European warrant issued by Spain, a German police spokeswoman told AFP.

The arrest comes five months after Puigdemont went on the run as Spanish prosecutors sought to charge him in the wake of a vote by the Catalan parliament to declare independence.

"It angers us that they arrested Puigdemont, he is our highest representative," said 22-year-old architecture student Judit Carapena told AFP at the protest.

Spain’s central government should not "sing victory because it is not the end of separatism, far from it," she added.

Yolanda Salleras, a 37-year-old physiotherapist, said they time had come for Catalan separatists to do "something more radical" like an open-ended strike "until they free everybody".

Aside from Puigdemont, nine other Catalan separatist leaders are in jail in Spain over the region's separatist push.

According to Catalan public radio, CDR members blocked several roads in Catalonia, causing traffic jams, just as they did during two strikes in the region last year called to protest police violence during a banned independence referendum held in Catalonia on October 1.

Puigdemont's detention puts his fate in the hands of German courts, which will have to decide whether to pass him to Spanish authorities to face charges of "rebellion and misuse of public funds".

It is the latest chapter in a secession saga that has bitterly divided Catalans and triggered Spain's worst political crisis in decades.

Puigdemont will be brought before a German court on Monday, who will then decide if he is to remain in custody pending extradition proceedings.

The arrest comes two days after Spain's supreme court issued international arrest warrants for 13 Catalan separatists including Puigdemont and his nominated successor Jordi Turull over their role in the region's failed bid for independence.

The court said they would be prosecuted for "rebellion", a charge which carries a maximum sentence of 30 years in prison.

Issuing the warrant for Puigdemont on Friday, Judge Pablo Llarena accused the ousted Catalan leader of organising an independence referendum in October last year despite a ban from Madrid.

The vote had been swiftly followed by the Catalan parliament's declaration of independence on October 27.

As Spanish authorities moved in to impose direct rule over the region, Puigdemont and four other separatist leaders fled to Belgium. A sixth one fled the country on Friday, reportedly to Switzerland.

Hours after Puigdemont was detained in Germany, a spokesman from Police Scotland said one of them, Clara Ponsati, who has since gone to Scotland and is wanted for both rebellion and misuse of public funds, was "making arrangements" to surrender to authorities there.

Puigdemont had been visiting Finland since Thursday, but slipped out of the Nordic country before Finnish police could detain him.

Puigdemont's lawyer Jaume Alonso-Cuevillas, added on Twitter that he was picked up by German police as he was travelling back to Belgium to "present himself, as always, at the disposal of Belgian courts".

Spanish police said the arrest came thanks to a "coordinated operation between police and the CNI", Spain's intelligence agency.

German authorities have 60 days to decide whether to extradite Puigdemont to Spain.

Elsa Artadi, a lawmaker with Puigdemont's Together for Catalonia party, said that he should fight his extradition to Spain.

"Spain does not guarantee a fair trial; only revenge and repression," she wrote on Twitter.

"What they are doing these days is totally disproportionate, we are being treated like criminals for wanting independence," Rosa Vela, a 60-year-old teacher, told AFP, at the protest in Barcelona.

While separatist parties won Catalonia's regional elections in December called by Madrid, they have been unable to elect a president and form a government as they have picked candidates are now either in exile, in jail or facing prosecution.

After Puigdemont was forced to withdraw his bid for the presidency as he could not return to Spain without facing arrest, another pro-independence leader Jordi Sanchez followed suit when a judge refused to let him out of jail to be sworn in. A third candidate, Jordi Turull, was placed in custody on Friday.

Fresh regional elections will be triggered if a new leader is not elected by May 22.