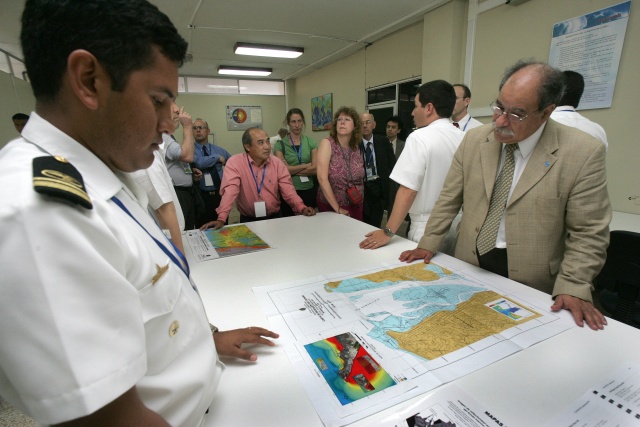 Scientists taking part in the XXII Session of the ICG/PTWS (Intergovernmental Coordination Group for the Pacific Tsunami Warning and Mitigation System) visit the Instituto Geografico de la Armada (INOCAR) tsunami alert system 20 September, 2007 in Guayaquil, Ecuador. Sixty-six scientists from 26 countries met during four days in Guayaquil to discuss the seaquake detection and alert systems along the shores of the Pacific, Atlantic and Indian oceans and the Caribbean. (AFP PHOTO/Rodrigo BUENDIA)

(AFP) - A 6.4 magnitude earthquake struck off eastern Indonesia in the early hours of Monday, triggering a brief tsunami alert that was swiftly lifted, according to seismic monitoring organisations.

The quake struck deep at some 171 kilometres (106 miles) below the earth's surface in the Banda Sea, the US Geological Survey said.

A tsunami alert was initially triggered by the Indian Ocean Tsunami Warning and Mitigation System (IOTWMS).

However IOTWMS followed up with a second bulletin that said there was "no threat to countries in the Indian Ocean".

The quake's epicentre was located in a sparsely inhabited part of the Banda Sea, 380 kilometres from Ambon, the capital of Maluku province.

Local officials said there were no reports of damage or injury.

"The tremor was felt mildly for two to three seconds by the locals, there was no panic and no tsunami threat," disaster mitigation agency spokesman Sutopo Purwo Nugroho told AFP.

A similar 6.1-magnitude quake hit close to Monday's epicentre on 26 February and caused no damage.

Indonesia sits on the so-called Pacific Ring of Fire, a seismic activity hotspot.

It is frequently hit by quakes, most of them harmless.

However the archipelago remains acutely alert to tremors that might trigger tsunamis.

In 2004 a devastating tsunami caused by a magnitude 9.3 undersea earthquake off the coast of Sumatra killed 220,000 people in countries around the Indian Ocean, including 168,000 in Indonesia.