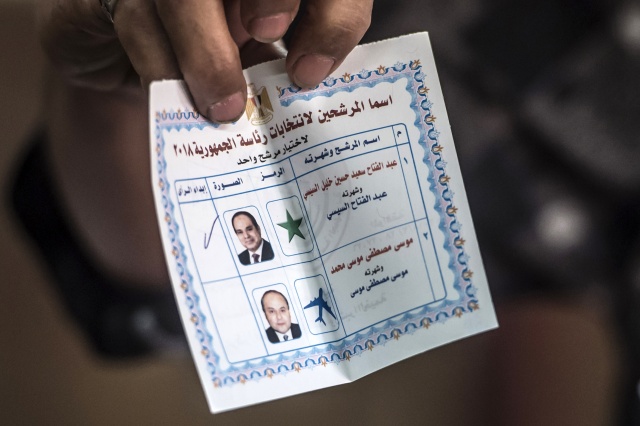 An Egyptian man casts his ballot at a polling station in Cairo's northern suburb of Shubra al-Khaymah on the second day of voting in the 2018 presidential elections on March 27, 2018. (KHALED DESOUKI / AFP)

(AFP) - Hundreds of President Abdel Fattah al-Sisi's supporters revelled outside polling stations in Cairo this week as voting got underway to celebrate what they expect will be his certain re-election.

In the southwestern neighbourhood of Al-Haram, close to the ancient Giza pyramids, women danced and a man beat a large drum, while those gathered around them waved the Egyptian flag and sang in unison.

"In spite of America, long live Egypt. Long live Egypt with its great military," chanted a woman dressed in a black gown and a bandana in the colours of the Egyptian flag, and with a flag wrapped around her shoulders.

Scores of employees, mainly assembly line workers, at a government pharmaceutical company across the street arrived together, not to vote, as they were not registered at this station, but to cheer for Sisi, the military, and the police.

Sisi was elected a year after leading the 2013 military ouster of former Islamist president Mohamed Morsi, amid mass protests against his rule.

"We got together with the officials from the (company's) union and they told us all to come to this school... The whole company is united... we all love Sisi," said Sahar Nasr, 41.

Mother-of-six Nasr said: "We came here to salute Sisi and each of us will go to their (polling) station and then go back to work".

Sisi is facing a single opponent, Moussa Mostafa Moussa, a little-known politician and head of the liberal Al-Ghad party who himself is a supporter of the incumbent.

All other presidential hopefuls were arrested or withdrew.

The opposition has called on people for weeks to boycott the vote, calling it a "charade".

A few motorists passing by hurled insults at the pro-Sisi crowds, accusing them of being "liars" before quickly driving away.

With Sisi's win a certainty and without a serious contender, the only barometer that concerns Sisi is the turnout.

In the past few weeks, and increasingly in recent days, Sisi, his government, and pro-state media have called on people to go and vote, saying that by doing so, they were standing up to terrorism.

In Al-Haram, police barricaded the street where the polling station is set up, two days after a car bomb killed two policemen in the Mediterranean city of Alexandria.

The Islamic State group's affiliate in Egypt, based in North Sinai, has vowed to disrupt the elections.

Since polling stations opened at 9:00 am (0700 GMT), both candidates have voted, Sisi in the eastern district of Heliopolis, according to state TV, and Moussa at a station in downtown Cairo.

In front of Sisi's polling station, guarded by the military, ordinary citizens also came to vote to the tune of a new song by Egyptian pop star Hakim, calling on people to participate.

"Since the revolution (2011), I have considered it as my duty to vote," said Basma Sherif, a physical education professor.

Since Sisi's election in 2014, conditions have calmed, although the opposition says it has been effectively silenced, while domestic and international rights groups say abuses are on the rise.

In the middle of Tahrir Square, the epicentre of the 2011 uprising, a large truck played loud patriotic songs as dozens of young men and women waved the Egyptian flag and danced.

Excerpts of Sisi's speech, often spoken in a nationalistic tone, played in sequence on a large screen, installed a few days earlier in the place were, seven years ago, Egyptians celebrated Mubarak's fall.

General » Be a reporter: Write and send your article » Subscribe for news alert
Tags: Egypt, Vote