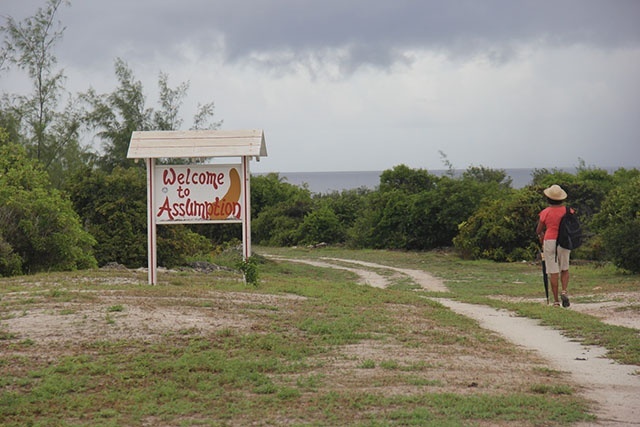 The island of Assumption has been in the news for the past couple of months after Seychelles signed a 20-year agreement with the Indian government to build military facilities on the island. Opposition lawmakers and many citizens do not want to see the military arrangement take place.

The island, which is situated some 1,140 southwest of the Seychelles’ main island of Mahe, is part of the Aldabra group. It was discovered by Captain Nicolas Morphey on  August 14, 1756, a day before the Feast of the Assumption of Mary, a holy day for Catholics, hence its name.

In 1908, the island was leased to IDC who built a coconut plantation on the island. The first settlement was in the northern part of the island.

SNA looks at 10 things that make the island special.

The mining of guano

Guano mining began at the turn of the 20th century and by 1945 more than 160,000 tonnes of guano (seabird droppings) had been scraped off the island.

Some deposits were recorded as being 15 metres thick. Removal of the plants caused the demise of the seabirds.

Assumption could be called Butterfly Island. There is no other island in Seychelles where it’s possible to see such a range of species, including the Belenois Aldabrensis -- endemic to Assumption, Aldabra and Astove. Belenois aldabrensis is a butterfly in the family Pieridae and most are white, yellow, or orange in colour, often with black spots.

The native Tournefortia argentea locally known as bwa taba is one of the dominant plants in the dune habitat and elsewhere on Assumption. This is the unique food plant of the endemic day-flying moth Utetheisa lactea aldabrensis, found only on Assumption.

The grasshopper Ptenoscirtus Aldabrae, endemic to Assumption, Aldabra, Cosmoledo and Europa, is among the insects that live in the vicinity of the sand dunes of the island.

It is a species of lizard in the family Gekkonidae. The natural habitats of P. abbotti are tropical dry forests.

During the period of guano mining, giant tortoises were eliminated from Assumption, but some were later re-introduced from Aldabra. Today a breeding population of at least several hundred giant tortoises inhabits Assumption Biodiversity.

One of the most beautiful beaches of the archipelago

A single unbroken beach, 6,000 metres in length spans most of the west coast of Assumption. It is arguably one of the most beautiful beaches in all of Seychelles with clear turquoise waters immediately offshore—a potential paradise for tourism.

The island was a popular cruise stop due to its long jetty which is now left in ruins. The jetty was built some 25 years ago along with the airstrip.

Although the island is scarcely populated it has a small burial place which dates back to the arrival of the first settlers. However, little is known about the people who were buried there.