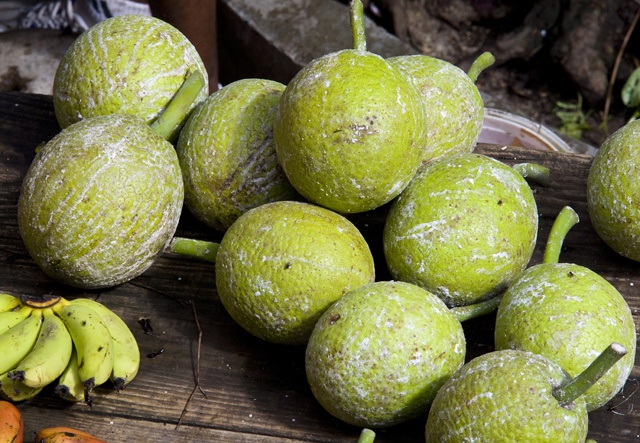 (Seychelles News Agency) - They say if that you eat breadfruit in the Seychelles at least once, then you are sure to come to the paradise isles again.

Breadfruit is so well-loved in the Indian Ocean islands of Seychelles that when the fruit is harvested – often at great risk to the pickers who venture up the extremely tall breadfruit trees – they are eagerly shared and can help feed an entire neighbourhood.

This is why scientists researching ways to provide countries threatened by climate change with greater food security have proposed the breadfruit as a wonder-food that could feed some famine-stricken communities and bring down hefty staple food importation costs for others.

According to an article published in the New Scientist, more breadfruit are produced per hectare than rice, wheat and corn, and one breadfruit, weighing an average of three kilograms can provide the essential carbohydrate portion of a meal to a family of five.

Food security experts in India recently announced that jack fruit could also be propagated in a similar manner.

Along with cassava (yam), breadfruit used to be a popular and traditional staple food in Seychelles in the years before the regular importation of other staples such as rice, potatoes and bread flour. The fruit, known locally as friyapen, has a tough green outer skin and a white or yellow potato-like inner texture and can be boiled, grilled, fried, steamed or roasted.

Breadfruit has been a vital staple crop in the Pacific for over three thousand years. The species originated in the South Pacific, most likely in New Guinea, and was spread throughout the Oceania region by islanders settling in the islands of Melanesia, Micronesia, and Polynesia.

In the late 1700s several seedless varieties were introduced to Jamaica and St. Vincent from Tahiti and a Tongan variety was introduced to Martinique and Cayenne via Mauritius. They were then spread throughout the Caribbean, the Maldives, the Seychelles, Indonesia and Sri Lanka and to the mainlands of Central and South America, Africa, India, Southeast Asia, Madagascar, northern Australia, and even southern Florida.

The vitamin-rich fruit can also be ground into a naturally gluten-free flour that can be used to make desserts such as pancakes, and the fruit can also be used in both sweet and savoury dishes, including breadfruit crisps and ladob, a traditional sweet dessert.

Breadfruit propagation has long featured in government initiatives to enhance national food security in the Seychelles, which imports up to 90 percent of its food due to limited areas of flat land available for agricultural cultivation.

In 1992, the ten-year Agricultural Development Strategy of the Seychelles included breadfruit as one of the important traditional food crops to be conserved and propagated, along with other more popularly cultivated crops.

The Agricultural Development Strategy of 2007–2011 also made an effort to further popularize breadfruit, using the successful “Every Home a Garden” national campaign.

The launching of the Cottage Industry policy some 10 years ago has brought about a rise in entrepreneurs processing breadfruit into chips, which thus increased demand for the fruit. The majority of breadfruit trees in Seychelles are found in the wild, and grow to great heights, making it extremely difficult and risky to harvest the fruit. However, smaller juvenile plants cultivated from root cuttings as part of the national propagation programme have enhanced the fruit supply over recent years.

Breadfruit and science can feed the world

Diane Ragone of Hawaii’s National Tropical Botanical Garden (NTBG) has been studying the plant since the 1980s, studying hundreds of varieties from 34 countries and establishing the NTBG’s Breadfruit Institute on the Hawaiian island of Maui.

Ragone and her colleagues are working with the charity Alliance to End Hunger to find ways of establishing or distributing breadfruit to places in need of greater food security across the world.

They are now investigating which varieties are best suited to certain environments and climates in different countries as well as which varieties can produce the best crop yields and protein content.

Some types have been found to be highly tolerant to salt levels in the soil, an important factor as sea levels begin to rise in some small island countries.

The scientists are also using tissue culture techniques to create varieties of breadfruit trees that yield more fruit sooner than the usual three to five years after planting, with limited success – they have so far managed to grow disease-free trees that start bearing fruit at two years of age.

Since the Breadfruit Institute began its propagation efforts, 35,000 saplings have been sent to 26 countries, including Jamaica and Haiti. A Samoan variety known as Ma’afala, bears fruit in a different season to varieties already in the Caribbean, which is hoped will extend the breadfruit season for harvesting.