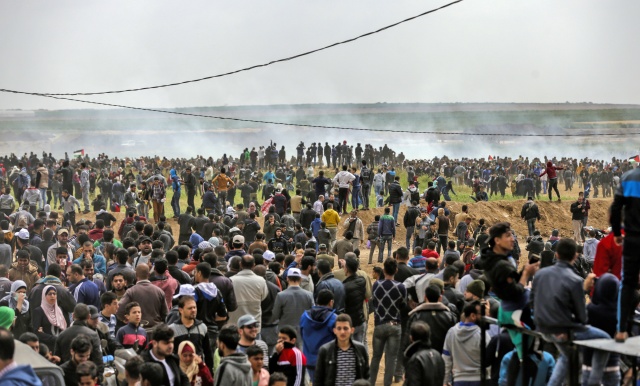 (AFP) - The UN Security Council heard fears of a further escalation in Israeli-Palestinian violence in the Gaza Strip during emergency talks Friday despite a failure to agree a joint statement on deadly clashes.

UN Secretary-General Antonio Guterres also called for an "independent and transparent investigation" and reaffirmed "the readiness" of the world body to revitalize peace efforts, a spokesperson said.

Kuwait requested the meeting to discuss the unraveling situation in Gaza, where Palestinians said Israeli fire killed 16 people in the conflict's deadliest single day since the 2014 Gaza war.

"There is fear that the situation might deteriorate in the coming days," said assistant UN secretary general for political affairs, Taye-Brook Zerihoun, urging maximum restraint.

Britain and the United States expressed regret that the timing of the meeting -- the first night of Passover -- meant Israeli officials could not attend. Leading ambassadors sent deputies in their place.

"It's vital that this Council be balanced in its approach," a US diplomat told the meeting. "We should have found an arrangement for all parties to participate tonight," he added.

"We are deeply saddened by the loss of life today," the diplomat added. "Bad actors who use protests as a cover to incite violence endanger innocent lives," he added.

"The risk of escalation is very real," the French representative said. "There is the possibility of a new conflict in the Gaza Strip."

In a written statement before the meeting, Israel's ambassador to the United Nations, Danny Danon, blamed Hamas for the violence.

The violence broke out as tens of thousands of Gazans marched near the Israeli border to demand that the right of return for Palestinian refugees who fled or were expelled since the creation of Israel.

Israeli tank fire and an air strike also targeted three Hamas sites in the Gaza Strip after what the military said was an attempted shooting attack against soldiers along the border that caused no injuries.

The health ministry in Gaza said 16 Palestinians were killed by Israeli forces and more than 1,400 were injured, including 758 by live fire, with the remainder hurt by rubber bullets and tear gas.

Palestinians accused Israel of using disproportionate force. The Israeli military said the protests were used as cover by militants to either break through the border or carry out attacks.