Pope urges end to 'carnage' in Syria in Easter message 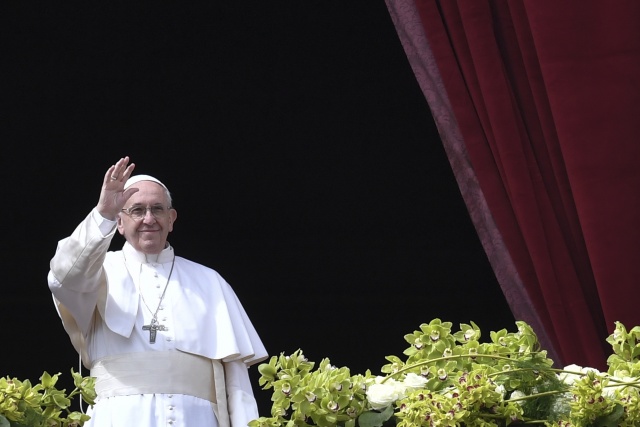 Pope Francis delivers the "Urbi et Orbi" blessing to the city and to the world from the balcony of St Peter's basilica after the Easter Sunday Mass on April 1, 2018 in Vatican. Christians around the world are marking the Holy Week, commemorating the crucifixion of Jesus Christ, leading up to his resurrection on Easter. (Andreas SOLARO / AFP)

(AFP) - Pope Francis on Sunday called for an end to "carnage" in Syria and "reconciliation" in the Middle East in his traditional Easter message.

"Today we implore fruits of peace upon the entire world, beginning with the beloved and long-suffering land of Syria," the pontiff said in the "Urbi et Orbi" (To the City and the World) address.

Appealing to the "consciences of all political and military leaders," Francis urged "that a swift end may be brought to the carnage" in Syria as 80,000 pilgrims listened in St Peter's Square and millions watched the speech broadcast live around the world.

The head of the world's 1.2 billion Catholics asked that "provisions be made to facilitate access to the aid so urgently needed by our brothers and sisters, while also ensuring fitting conditions for the return of the displaced" to Syria.

As he spoke, a final deal was reportedly reached for fighters and civilians to leave the last opposition-held pocket of Eastern Ghouta.

That would mark a major milestone in Syrian President Bashar al-Assad's efforts to regain control of territory seized by rebel factions during the seven-year civil war which has left some 350,000 dead and displaced millions.

The 81-year-old Francis said the Holy Land was "also experiencing... the wounds of ongoing conflict that do not spare the defenceless", singling out the conflict in Yemen where some 10,000 people have died since March 2015.

Francis then prayed for the "fruits of dialogue for the Korean peninsula" and that the "discussions under way may advance peace and harmony within the region".

February's Winter Olympics triggered a fast-moving rapprochement that will see the North's Kim Jong Un sit down with the South's President Moon Jae-in in late April, with a US summit with President Donald Trump planned for May.

Earlier Sunday, the pontiff celebrated Easter mass in the flower-bedecked square, which was under tight security.

Tourists and clergy alike formed long queues to have their belongings checked and pass through metal detectors to access the mass on the holiest day in the Christian calendar, marking Jesus's resurrection.

"For those who believe in the radical form of holy war, Rome represents so many things put together -- there's the pope, the Vatican..."

Italian authorities are concerned that some of the estimated 120 radicalised Italians who left for Syria or Iraq to fight with jihadist groups could be returning to the country posing as migrants.

Last week saw a wave of anti-terror arrests, with Interior Minister Marco Minniti warning of a high risk of an attack.