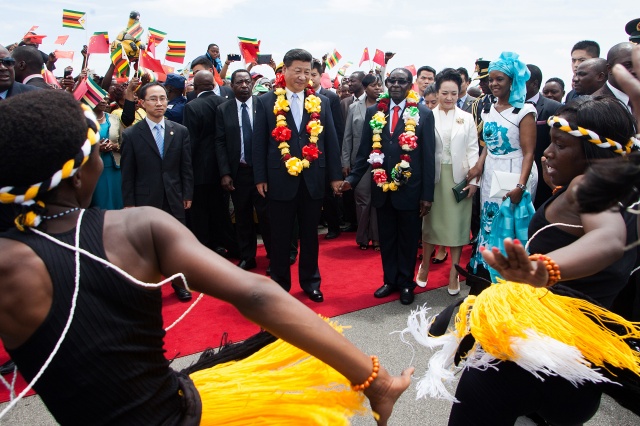 This File photo shows Chinese President Xi Jinping (C-L) holding hands with former Zimbabwe's President Robert Mugabe(C-R) on a visit in Harare in December 1, 2015. Beijing has long been one of Mugabe's most powerful allies and a major trade partner, as the West shunned him over his government's human rights violations, but it avoided taking sides during his ouster. (JEKESAI NJIKIZANA / AFP)

(AFP) - Zimbabwe's President Emmerson Mnangagwa was due to meet Chinese President Xi Jinping on Tuesday as he seeks economic support from a major partner that previously backed his ousted predecessor Robert Mugabe.

Mnangagwa, who received military training in China when he was a young liberation fighter decades ago, will be greeted by Xi at the colossal Great Hall of the People for his first state visit to Beijing since taking power.

Mnangagwa took office in November after a military takeover ended Mugabe's 37-year reign, though he has also been accused of playing a key role in his mentor's authoritarian regime that left the economy in ruins and under sanctions.

In an interview with China's Xinhua state news service, Mnangagwa said his trip was to "say thank you not only to the president of China but also the people of China for standing and supporting Zimbabwe during the hard times when the West imposed sanctions on us."

He will also seek to sell Zimbabwe as a destination for Chinese investment, he said, adding that he would participate in economic forums aimed at attracting business to the country.

"It's an issue of leapfrogging after 18 years of isolation so that we catch up with the rest of the developing countries."

Mnangagwa has firsthand experience of sanctions: he was targeted by EU and US measures imposed on Mugabe and his close allies over violence and intimidation surrounding Zimbabwe's 2008 presidential campaign.

But Mugabe sacked Mnangagwa from his job as vice president in November over a succession tussle with the first lady, Grace Mugabe, setting off a crisis that led to the veteran president's ouster.

The visit comes as China takes a more proactive role in Africa, where it has long invested in infrastructure projects and sought resources, but has recently built its first military base in Djibouti.

Beijing also is believed to be taking a more active role in Zimbabwe's politics.

The country's then army chief, General Constantino Chiwenga, visited Beijing shortly before Mugabe's November ouster, leading to questions about whether Beijing had any role in the power transition.

China denied it played any part in the military takeover.

Beijing had long been one of Mugabe's most powerful allies and a major trade partner, as the West shunned him over his government's human rights violations, but it avoided taking sides during his ouster.

Relations between the two countries date back to the liberation struggle of the 1960s, when Beijing provided arms and trained some of the top guerrilla leaders, including Mnangagwa.