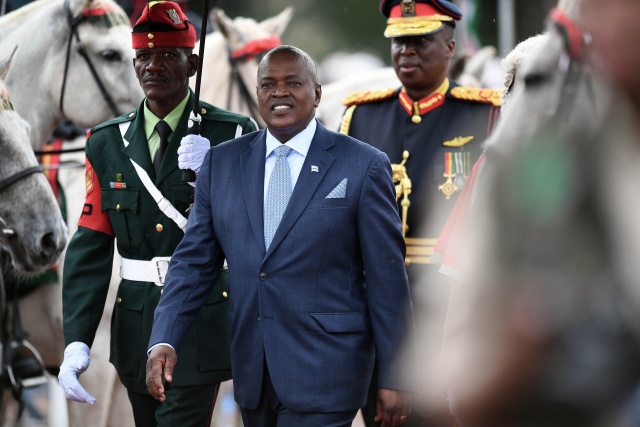 Botswana's new President Mokgweetsi Masisi inspects the presidential guard of honour after taking the oath as the 5th President at the National Assembly in Gaborone on 1 April 2018. Botswana's new president used his inauguration speech on April 1 to vow to tackle youth unemployment in one of Africa's most stable countries.(MONIRUL BHUIYAN / AFP)

The swearing-in ceremony in parliament came after Ian Khama stepped down having completed the constitutional maximum of 10 years in office.

As the vice president, Masisi took over automatically, and he is likely to secure a further five-year term in elections in October 2019 when the ruling Botswana Democratic Party (BDP) is expected to hold on to power.

Botswana prides itself on good governance and rule of law, and the carefully managed handover of power comes a full 18 months ahead of parliamentary elections in 2019.

Masisi, the former vice president, takes over a county widely seen as an African success story that has made good use of its lucrative income from diamond, beef and tourism.

It is rated as the least corrupt country in Africa by Transparency International.

But it has also struggled with rising unemployment rate of about 18 percent and an HIV epidemic.

"It is because of the peace and tranquillity that our leaders have sustained for so long that Batswana (people) have continued to enjoy relative prosperity," Masisi said after taking his oath.

"One of my top priorities as the president of this country will be to address the problem of unemployment especially amongst the young people."

He also pledged to improve treatment and prevention of HIV in a country with a 22 percent infection rate among adults.

President Masisi, 55, is a close ally of Khama and a BDP veteran.

He is a US-educated former teacher, UNICEF official and education minister, whose father was also a cabinet minister.

"Despite its small size, Botswana continues to play an important role in the promotion of global issues such as respect for human rights, democracy, good governance (and) the rule of law," Masisi said.

He earned a record for straight talking, often criticising leaders including US President Donald Trump and -- unlike many in the region -- neighbouring Zimbabwe's then-president Robert Mugabe as well as Democratic Republic of Congo President Joseph Kabila.

Khama led the BDP to landslide victories in two elections, although the party won less than 50 percent of the vote for the first time in 2014.

"(But) a slowing economy and increasing public discontent has damaged the narrative of Botswana's 'special character', of a country being able to escape the 'resource curse'."

Four opposition parties have said they could unite for the 2019 election to try to unseat the BDP, which has held power since independence from Britain in 1966.

His father, Seretse Khama, served from 1966 to 1980 as Botswana's first president.

Africa » Be a reporter: Write and send your article » Subscribe for news alert
Tags: Botswana, politics