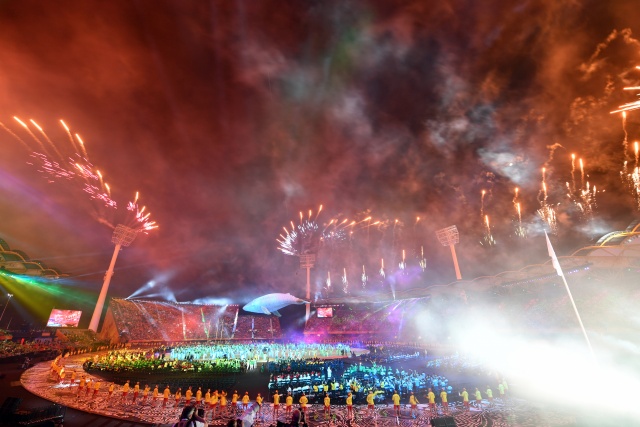 Fireworks erupt as a whale is seen during the opening ceremony of the 2018 Gold Coast Commonwealth Games at the Carrara Stadium on the Gold Coast on April 4, 2018. (SAEED KHAN / AFP)

(AFP) - A heavy downpour, a giant floating whale and Aboriginal protests marked the start of the Commonwealth Games on Wednesday as Australia flagged off 11 days of competition in the resort city of Gold Coast.

Britain's Prince of Wales declared the Games open at an upbeat ceremony featuring dancing lifeguards, giant flip-flops and Australia's team marching in to Men At Work's "Down Under".

"G'day!" said Peter Beattie, chairman of the organising committee, adding: "We are the friendliest people on this planet... we invite you all now to share the dream."

The Games baton arrived in a turquoise campervan and was delivered to Games president Louise Martin, who struggled before opening it and handing a message inside to Prince Charles.

"Over the years these 'Friendly Games' have shown the potential of the Commonwealth to connect people of different backgrounds and nationalities," the prince told the near-capacity crowd in the 35,000-seat Carrara Stadium.

A giant replica of Migaloo, the white humpback whale which has become a symbol of environmentalism in Australia, then floated gently into the stadium.

The Games at beachside Gold Coast give Australia a timely opportunity to repair their sporting reputation after a cheating scandal in cricket left the country reeling.

The competition across 23 different sports should soothe the trauma of the cricket row, after a player was caught doctoring the ball with sandpaper.

"Sand and sport have not been a happy combination for this country of late as we endure our national shame over the ugly fusion of cricket and sandpaper," The Australian newspaper said in an editorial.

"Starting tonight on the Gold Coast we can flick the switch to optimism and celebration."

Enthusiasm is not universal, however, and Aboriginal protesters held up the final stages of the Games' baton relay with a sit-in along its route in Gold Coast.

Outside the opening ceremony, there were minor scuffles as about 100 protesters chanting "Always was, always will be Aboriginal land" faced off with police on horseback.

Indigenous activists are planning more demonstrations and have dubbed the event the "Stolenwealth Games", a reference to Britain's colonisation of their ancestral lands.

Australia will hope for a fast start when competition gets underway, with Olympic champions Mack Horton and Kyle Chalmers expected to star in the outdoor Southport pool.

Cate Campbell looks back in form after her 2016 Olympics flop, and South Africa's Chad le Clos could become the most successful athlete in Games history when he takes on a Michael Phelps-style seven swimming events.

English breaststroker Adam Peaty, who has his eye on an unprecedented sub-57 seconds in the 100 metres, is another who will try to crash the Australian pool party.

Australia will also go head-to-head with England in track cycling, where they will field a revamped line-up under the tutelage of British coach Simon Jones.

In athletics, Gold Coast's world champion hurdler Sally Pearson is battling an Achilles' problem but Jamaican sprinter Yohan Blake should provide fireworks in the absence of the retired Usain Bolt.

The Games' 4,000-plus athletes will also compete in events including rugby sevens, shooting, gymnastics, badminton, netball, boxing and beach volleyball.

Organisers insist the Games, which started life as the British Empire Games in 1930, are still relevant in the modern world, pointing to the move to an equal number of men's and women's medal events.

For Australia, displacing eternal rivals England -- the 2014 table-toppers -- at the head of the medals tally would be the perfect tonic after their cricketing calamity.

General » Be a reporter: Write and send your article » Subscribe for news alert
Tags: CGames, 2018