China hits back after Trump threatens $100 bn in tariffs 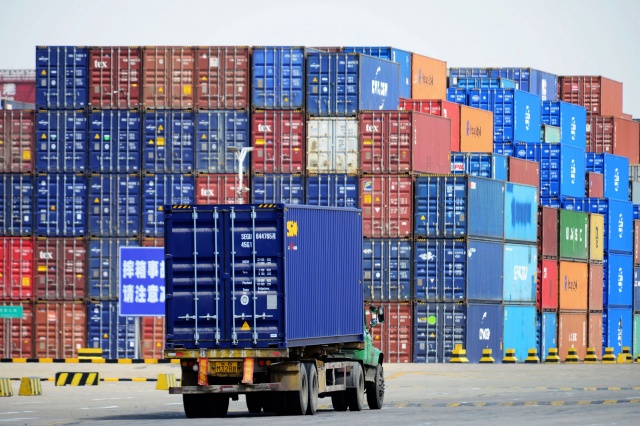 Shipping containers are seen at the port in Qingdao, in China's eastern Shandong province on April 6, 2018. China said on April 6 it is ready to pay "any cost" in a trade war after US President Donald Trump threatened an additional 100 billion USD in tit-for-tat tariffs on Beijing. (AFP)

(AFP) - China said Friday it is ready to pay "any cost" in a trade war after US President Donald Trump threatened an additional $100 billion in tit-for-tat tariffs on Beijing.

"If the US side disregards opposition from China and the international community and insists on carrying out unilateralism and trade protectionism, the Chinese side will take them on until the end at any cost," the commerce ministry said in a statement on its website.

"We don't want a trade war but we aren't afraid of fighting one."

The US on Tuesday published a list of $50 billion in Chinese exports set to be hit by US tariffs because of Beijing's alleged theft of intellectual property and technology.

China retaliated Wednesday by announcing plans to impose levies on $50 billion worth of major US exports such as soybeans, cars and small aircraft.

On Thursday Trump responded to Beijing's countermeasures by doubling down.

"Rather than remedy its misconduct, China has chosen to harm our farmers and manufacturers," Trump said in a defiant statement.

"In light of China's unfair retaliation," Trump said he had instructed trade officials to "consider whether $100 billion of additional tariffs would be appropriate".

Trump said he was still open to talks, but only if they were aimed at achieving "free, fair, and reciprocal trade".

In the text released by the WTO, China's delegation requested "consultations" with Washington "concerning the proposed tariffs (and) measures that the United States accords to certain goods in various sectors including machinery, electronics, etc. originating in China".

A "request for consultations" is the first step in a full-blown legal challenge at the WTO's Dispute Settlement Body.

None of the tariffs have yet come into effect, but the world's two largest economies are in a game of chicken that could inflict collateral damage on the global economy.

The prospect of a trade war has sent markets around the world on a rollercoaster ride, with traders seemingly unable to decide if the threat is real or bluster.

This dispute -- ostensibly over Beijing's alleged theft of intellectual property and technology -- is just one front in the ongoing trade tussle.

Trump has also threatened to impose steep tariffs on steel and aluminium imports, which would include China.

China responded with proposed tariffs on fresh fruit, pork and recycled aluminium, which accounted for $3 billion of US exports last year.

The United States has dominated the global economy for much of the last century, but this fight comes as China -- with its population of 1.4 billion -- is starting to challenge US hegemony.

And Beijing has the economic equivalent of a nuclear weapon, holding more than one trillion dollars' worth of US debt.

Offloading just a portion of that debt could spook bond markets and send America's cost of borrowing soaring.

Trump repeatedly said during his election campaign that he would get tough with Beijing, but Thursday's announcement was greeted with barely concealed horror in some circles, even among his own Republican Party.

"Hopefully the President is just blowing off steam again but, if he's even half-serious, this is nuts," said Republican Senator Ben Sasse.

"China is guilty of many things, but the President has no actual plan to win right now. He's threatening to light American agriculture on fire."

"Let's absolutely take on Chinese bad behavior, but with a plan that punishes them instead of us. This is the dumbest possible way to do this."

General » Be a reporter: Write and send your article » Subscribe for news alert
Tags: US, China, politics, trade