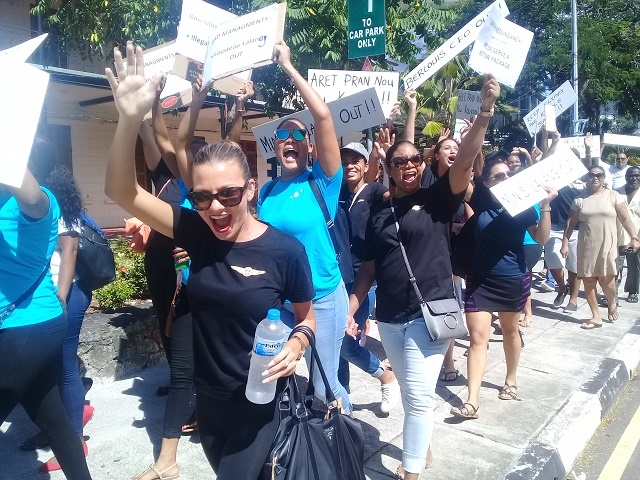 The peaceful protest on Friday took place in the centre of the capital near the clock tower. (Seychelles News Agency)

(Seychelles News Agency) - A group of Air Seychelles cabin crew members protested in the capital, Victoria, on Friday following the announcement last week that the airline is cutting 174 of its staff as it undergoes restructuring.

The airline currently has over 800 staff across 13 departments. Cabin crewmembers will be the most affected in the downsizing. Only four departments of the company will not be affected, including the ground handling.

The peaceful protest on Friday took place in the centre of the capital near the clock tower. It started at 3 p.m.

A cabin manager at Air Seychelles, Chantal Benoit, told SNA that she joined the protest because although the redundancy is inevitable, she is against it.

“We are seeing ourselves being laid off without a proper exit package. No consideration of what has been said in the last sitting of the National Assembly has been taken up,” said Benoit.

“Clearly the whole affair has been the result of mismanagement and everybody in management should step down. By so doing, this will assure a future for the airline,” she added.

Another cabin crew staff, Merdy Stravens, said that “some of us have children to feed and some of us even have loans to pay” and that he will continue to protest until the staff gets a positive result.

The Minister for Tourism, Civil Aviation, Ports, and Marine, Maurice Loustau-Lalanne told the National Assembly last week that “the labour force will be reduced and 202 posts will be affected.  These will include 174 employees who will lose their jobs and 28 vacant posts which will not be filled.”

Loustau-Lalanne said that the restructuring will allow Air Seychelles – the national airline -- to become a sustainable company in the fiercely competitive aviation industry.

Meetings in each department where staff will be affected have already been held, the Minister had told the National Assembly, the legislative body of the archipelago in the western Indian Ocean.

The demand of the protesters is in line with what Antoine Robinson from the Seychelles Federation of Workers Union told SNA last week.

Robinson had said that the package being offered is not enough and gave the salary of the cabin crew members as an example.

“Their basic salary is already low. This is beefed up with an allowance whenever they fly.  We had asked that Air Seychelles consider a six-month package including the allowances. It is sad that this has not been considered. Instead, a three-month package is being offered,” Robinson had told SNA.

This is the second time the national airline is downsizing as part of its restructuring plans. In 2012 around 166 staff members of the Air Seychelles were made redundant.

That same year in February, the United Arab Emirates national carrier, Etihad Airways, invested $45 million in Air Seychelles for a 40 percent share in the airline following problems of management and profitability.