Hundreds take shelter as Fiji braces for another cyclone 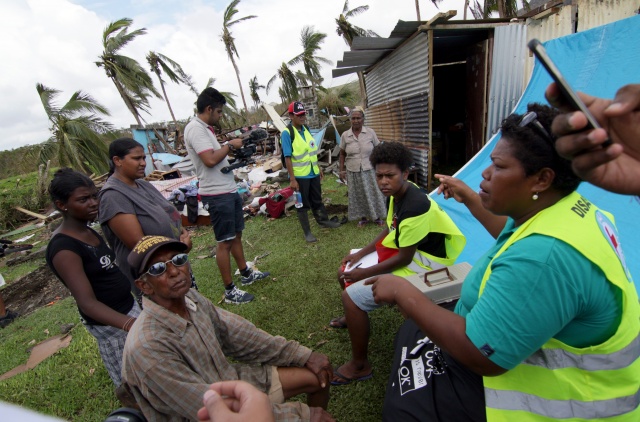 Fiji Red Cross Society members talk to residents of the Madhuvani settlement on February 26, 2016, who lost their homes to Cyclone Winston which devastated Fiji. Humanitarian aid was finally reaching isolated communities in Fiji devastated by super-cyclone Winston, with the government estimating the damage bill will top hundreds of millions of dollars. At least 44 people died when the most powerful storm in Fiji's history hit on February 20 and the UN says about 50,000 -- more than five percent of the entire population -- have been left homeless. (AFP PHOTO / STEVEN SAPHORE)

(AFP) - Hundreds of people were sheltering in evacuation centres as another tropical storm took aim at Fiji, officials said Saturday, as the South Pacific island nation went on high alert.

The storm was brewing east of Vanuatu and was expected to strengthen as it neared Fiji early next week.

"The concern for the weekend is strong winds, heavy rain, flooding of low lying areas and rivers," the Fiji Meteorological Service said in a statement.

"A cyclone warning has been issued early for the whole of the Fiji group as the tropical depression approaches the country, making people aware of the situation early," he said as heavy rain saw flood waters begin to rise again.

By noon Saturday (0000 GMT), flooding had forced hundreds of people to take shelter in evacuation centres in the north and west of Fiji.

"At about 6 am this morning, our area was flooded and we started preparing ourselves because police had arrived to take us to the evacuation centre," Laisa Vunitiko, from the village of Vulovi on Vanua Levu island, told the Fiji Times.

The Times said 490 families had taken shelter in the north while the National Disaster Management Office reported 192 people were in evacuation centres in the west.

General » Be a reporter: Write and send your article » Subscribe for news alert
Tags: Fiji