Exchanges of gunfire near president's residence in C.Africa 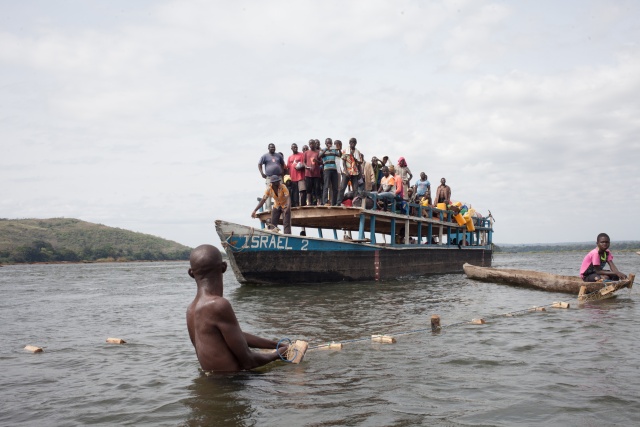 A boat passes in front of the Mobaye refugee fishermen, in Longo island, along the Oubangui River, in Damara district, on March 1, 2018.
The island of Longo, like other villages along the Oubangui River, has become a refuge for fishermen of the Haute-Kotto. They flee from the Anti-balaka who ransom them and kidnap them to force them to become combatants, notably through ritual scarifications.(FLORENT VERGNES / AFP)

(AFP) - UN troops and an armed group exchanged gunfire during the night near the president's residence in the Central African Republic, a security source said Monday.

The incident in the capital Bangui came hours after United Nations and Central African forces launched an operation targeting armed groups in a mainly Muslim district of the city. At least two people were killed and dozens wounded during the joint operation, according to UN and medical sources.

The security source said the exchanges late on Sunday took place after an armed group arrived "by the Ndeke Luka radio station by the road that leads to the residence" of President Faustin-Archange Touadera.

"The group was repulsed by UN peacekeepers from Egypt," the source said.

A spokesman for the UN peacekeeping force (Minusca), Herve Verhoosel, said 11 peacekeepers, mostly Egyptian, were among the injured in Sunday's joint operation.

The operation, which had targeted, the "bases of certain criminal groups", would continue "until the goal is achieved", Verhoosel told AFP.

Eight people belonging to the armed groups Force and 50/50 had been detained by Minusca and ammunition had been seized, he added.

The operation follows a resurgence in violence in the flashpoint PK5 neighbourhood of Bangui.

The Central African Republic has been struggling to return to stability since the country exploded into bloodshed after the 2013 overthrow of longtime leader Francois Bozize by the mainly Muslim Seleka rebel alliance.

France intervened militarily to push out the Seleka alliance but the country remains plagued with violence pitting groups competing for control of resources and areas of influence.